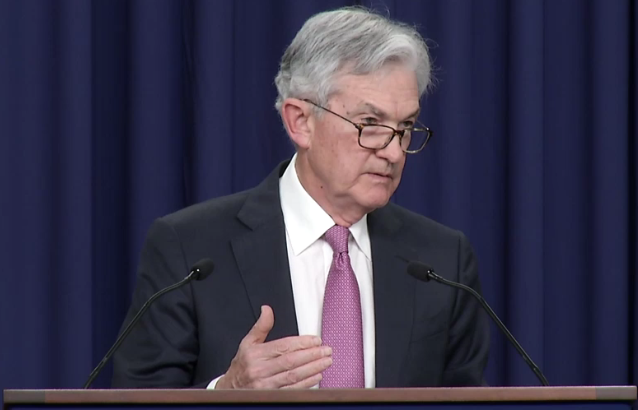 Federal Open Market Committee will meet to discuss another increase in mid-June.

The Federal Reserve on Wednesday made the move many had been anticipating, raising its rate for banks a half percentage point. The Fed's target range now stands at 0.75% to 1%.

Following the Federal Open Market Committee’s two day meeting, Fed Chairman Jerome Powell spoke for about 45 minutes at the first in-person meeting with the media since the pandemic ended.

Powell said the committee voted unanimously to approve the half percentage point increase, and that it supported similar increases at the next two meetings in June and July to continue to work toward a goal of inflation standing at 2%.

“Our policy has been adjusting and it will continue to do so,” he said. “We intend to significantly reduce inflation over time.”

Once again, Powell cited the main drivers of inflation as a tight job market, where there are almost two open jobs for every unemployed person; supply chain issues that are being exacerbated by a COVID-19 outbreak that is closing ports in China; and the war in Ukraine, which is affecting energy and commodities prices,.

But he reiterated he didn’t believe that the country was heading toward a recession, and pointed out that even though the economy shrank slightly in the first quarter, there were many positive economic indicators in the gross domestic product (GDP) report. He added he expected inflation to begin to flatten out.

“We have a good chance to restore price stability without a recession,” he said.

Powell was also asked whether a 0.75% or 1%  increase in the Fed rate could be on the horizon, but he dismissed that notion.

“Point 75 is not something the committee is considering,” he said, adding that if higher rates were appropriate based on where inflation rates head, the committee would do that.

He also noted that the markets think the Fed’s current forward guidance policy is credible, “and we want to keep it that way.”

The markets responded positively to the increase and the news that committee was not considering a .75 percentage point increase. The Dow jumped 2.8%, the S&P 500 was up 3% -it's largest increase since 2020, and the NASDAQ gained 3.2% at the end of trading Wednesday

For the near future, Powell said, the Fed’s goal is to continue to move its policy rate to more normal, or neutral, rates of 2% or 3%, as long as there is full employment and a strong economy.

Asked when the American public might begin to feel the effects of continued rate increases, Powell replied that though high inflation is very unpleasant, it's needed to bring inflation down.

“Everyone will be better off if we can get this job done,” he said. “The sooner the better.”

The report did not say how much the committee planned to reduce its holdings or for how long the trimming would continue.

“First, they announced a 50-basis-point increase in the federal funds target," Fratantoni said. "This change had been telegraphed clearly in recent speeches. The statement also repeated the language that the committee ‘anticipates that ongoing increases in the target range will be appropriate.’ In other words, we are far from done at this point.”

He added that the MBA forecasts that the federal funds target will reach 2.5%, the neutral rate, by the end of 2022.

“As clearly signaled in the March minutes, the FOMC will move to allow $60 billion in Treasuries and $35 billion in MBS to passively roll off the balance sheet each month, gradually reducing these asset holdings from extraordinary levels” he said, adding that the runoff will ramp up over the course of three months, which should allow markets to absorb this excess supply.

Fratantoni said it was important that neither the statement nor the balance sheet plan repeated the goal of returning the balance sheet to all Treasuries, and there was no mention about the potential for active MBS sales.

“Musing about active sales has likely increased volatility in the MBS market recently, as investors do not know how to interpret the vague signals that had been given,” he said.

MBA is forecasting that mortgage rates are likely to plateau near current levels, Fratantoni said, adding that the financial markets have attempted to price in the impact of Fed actions over this cycle, and are likely also pricing in the economic slowdown that will result.

“Once we are past this rate spike and associated volatility, MBA expects that potential homebuyers may be more willing to re-enter the market," he said. "Given how much higher rates will remain above the past two years, we do not expect refinance demand to increase any time soon.”

First American Deputy Chief Economist Odeta Kushi said Wednesday that the Fed's message is clear. “It’s imperative to get inflation under control, and the Fed will act aggressively to do so.”

“With house prices unlikely to fall due to ongoing supply-demand imbalance, and equity already sky high, the risk of foreclosure in mortgage-backed securities pools should remain low,” she said.