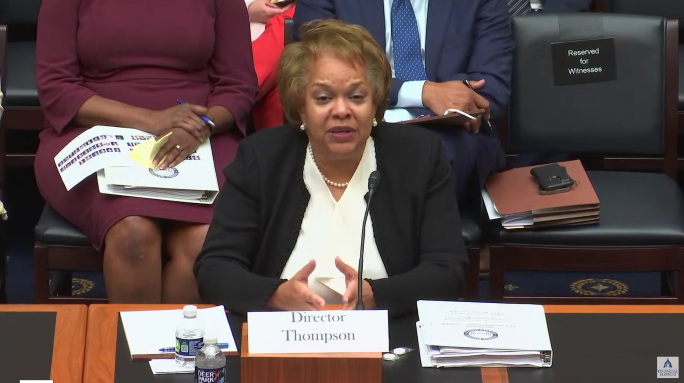 Under the supervision of the Federal Housing Finance Agency (FHFA), Fannie Mae & Freddie Mac are building combined capital reserves of $300 billion, while also working to transfer credit risk to the private sector.

That’s what FHFA Director Sandra L. Thompson told the U.S. House Committee on Financial Services on Wednesday, during her first appearance before the committee since being sworn in as director in June.

The hearing, titled Housing in America: Oversight of the Federal Housing Finance Agency, focused on the financial soundness of Fannie & Freddie, the government-sponsored enterprises (GSEs) that have been in conservatorship under the supervision of FHFA and the U.S. Department of Housing and Urban Development for 14 years.

Thompson has been at FHFA for more than nine years, the first eight as deputy director of the Division of Housing Mission and Goals, and then about a year as acting director of the agency before being sworn in as director on June 22. Before that, she spent more than 23 years at the Federal Deposit Insurance Corp. (FDIC) in a variety of positions, including as director for the Division of Risk Management Supervision.

Committee members from both sides of the aisle welcomed Thompson, all stating that her background as a regulator focused on financial soundness and safety is crucial to her new role in overseeing the GSEs.

Many of the Republicans on the committee, including some who recently co-signed a letter to the FHFA director urging her to testify before Congress about oversight of the GSEs, pressed Thompson on when the conservatorship might end, as well as about the capitalization levels for the GSEs.

In written remarks submitted to the committee before the hearing, Thompson said the FHFA has taken steps to improve the financial security of the GSEs.

“Since 2008,” when the conservatorship began, Thompson states in her written remarks, “FHFA has directed reforms to their practices and standards, management and transfer of risks, underwriting and loss mitigation policies, and the enterprises’ securitization infrastructure.”

She then highlighted the reforms and their results so far:

Thompson stated that, during the past year, “we have worked to ensure that the CRT programs remained a viable option by assuring adequate capital relief for the CRT issuances.”

She added, “Because of changes in the Senior Preferred Stock Purchase Agreements (PSPAs) between FHFA and the Treasury Department, the enterprises are retaining more of their earnings and building capital. These PSPA changes, coupled with robust comprehensive income, have significantly boosted net worth for both enterprises, although there is still a long way to go to meet regulatory capital requirements.”

During Wednesday’s hearing, Rep. Bill Posey, R-Fla., asked Thompson whether FHFA has any plans to remove the GSEs from conservatorship. She replied that while the agency continues to work with Fannie & Freddie to improve their financial conditions, the ultimate decision on ending the conservatorship rests with Congress.

Rep. Blaine Luetkemeyer, R-Missouri and a co-signer of the GOP letter to Thompson, asked whether achieving the combined $300 billion in capital reserves would be the point at which the conservatorship could end.

“Well, I think that when the enterprises meet their capital targets, that’s one component of exiting conservatorship,” Thompson said. “There are other factors that need to be taken into consideration. Certainly, conversations with the Treasury about the senior preferred shares. There are conversations with the Federal Reserve about certain policy issues …. There are just a number of issues that really need to be worked through. Meeting the capital target alone just won’t answer those questions.”

In addition to the GSEs, Thompson in her written remarks also addressed the Federal Home Loan banks. She noted that, as of March 31, 2022, the FHLBank System had $762.3 billion in assets and $374.6 billion in outstanding advances (loans to their members).

She said the pandemic that began in March 2020 “resulted in a steep advance increase, followed by a decline due to increased liquidity from fiscal and monetary policy.”

She said that as of Sept. 30, 2021, advances reached their lowest quarter-end level since 2001, but recovered significantly in 2022, “primarily from increased commercial bank member borrowing.”

From 1990, the Affordable Housing Program’s first year, through 2021, the FHLBanks awarded approximately $7.3 billion in AHP subsidies, assisting more than one million households, she said.

“The FHLBanks’ core function is to provide liquidity in times of stress,” she continued. “This support is critical for small and community banks that often do not have access to other sources of low-cost funding.”

Given the importance of the FHLBanks, which are approaching their 100th anniversary, “now is a good time to re-examine their approach,” she said. “We want to make sure they are positioned to continue to serve the needs of today and tomorrow, so FHFA will conduct a 90-year lookback, as well as a forward-looking analysis of the FHLBank System.”

Thompson said the review will include engaging with “a variety of stakeholders in the coming months, in addition to holding public listening sessions throughout the country. We want this review to be an opportunity to examine everything from the FHLBanks’ membership base, operational efficiency, and effectiveness, to more foundational questions about mission, purpose, and organization.”

Regulation and Compliance
Jul 22, 2022
Expansion Of Community Reinvestment Act A Poor Fit For A Non-Problem

Agency also issues request for information on the role of technology in housing finance.