Housing Inventory Up In December, But Still Historically Low 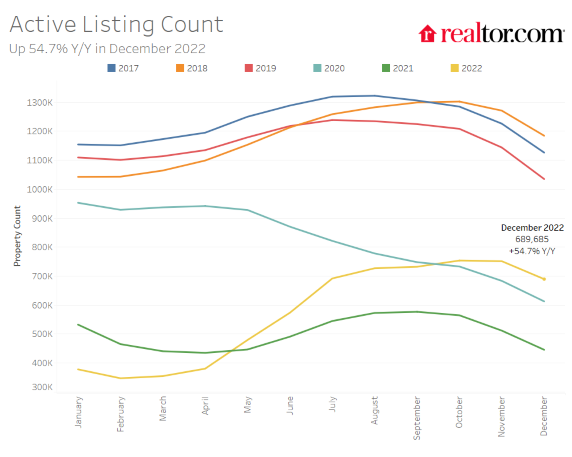 The U.S. housing market continued showing signs of normalizing in December, with inventory and time on market increasing and listing price growth moderating, according to a report from Realtor.com.

The company’s Monthly Housing Trends Report, released Thursday, found that after the frenzy of the past two years, there is good news for homebuyers in the new year with more options and more time to make a decision.

“In December, we saw both buyers and sellers pulling back as they continue to adjust to a challenging market,” said Danielle Hale, chief economist for Realtor.com. “Buyers started 2022 facing high home prices and limited inventories, and ended the year with interest rates roughly double where they started. Despite significant cooling in sales in 2022, some indicators remain in high gear.”

“Prices are still significantly higher and homes are selling faster compared to 2019 pre-pandemic levels,” Hale continued. “Although demand has softened compared to last year — pushing home price growth into single-digit territory for the first time in 12 months — moderation in home-price growth may encourage more buyers to return to the market in the months ahead, and may also be welcome news for sellers aiming to sell and buy at the same time.”

Still, she added, “affordability will remain a challenge, and buyers will want to keep a close eye on their potential mortgage payment — a mortgage calculator is a great way to do this.”

The supply of active listings for sale in the U.S. increased significantly in December over the previous year, signaling continued hesitation from buyers in the face of mortgage affordability and other obstacles, the report states.

Nationally, the active inventory of homes for sale grew 54.7% year-over-year in December, but was still well below pre-pandemic levels (-38.2% compared to the December 2017-19 average).

In December, growth in the typical asking price slowed to a single-digit pace for the first time since December 2021. While this was still higher than normal, it’s a significant slowdown from the peak 18% year-over-year pace seen earlier in 2022.

Realtor.com said that signals that fewer buyers are willing to take the plunge amid ongoing housing affordability challenges.

Despite recent easing in mortgage rates from their early-November peak, higher rates and home prices compared to a year ago have increased the typical mortgage payment by nearly $750 each month, or 58.9% more than last year, far outpacing recent rent growth (3.4%) and inflation (7.1%).

Realtor.com said it expects rates to climb higher early in 2023 before falling in the second half.

For-sale homes continued to spend more time on market compared to a year earlier amid a growing number of homes for sale and softening buyer demand.

Modestly rising incomes (+4.6% year over year in December) and a robust jobs market (unemployment remained at 3.5% in December), cannot completely offset lower buyer purchasing power, and as a result homes are sitting on the market for longer, as buyers take their time to decide, Realtor.com said.

Homes still sold faster in December than was common in 2019, with more affordable, lower-priced markets in the Midwest and Northeast seeing homes sell faster than in other areas.

Looking ahead, mid-sized markets that offer better affordability and solid jobs and economies, especially those among Realtor.com’s top housing markets of 2023, may continue to be attractive to homeshoppers, especially those with the flexibility to relocate, the company said.