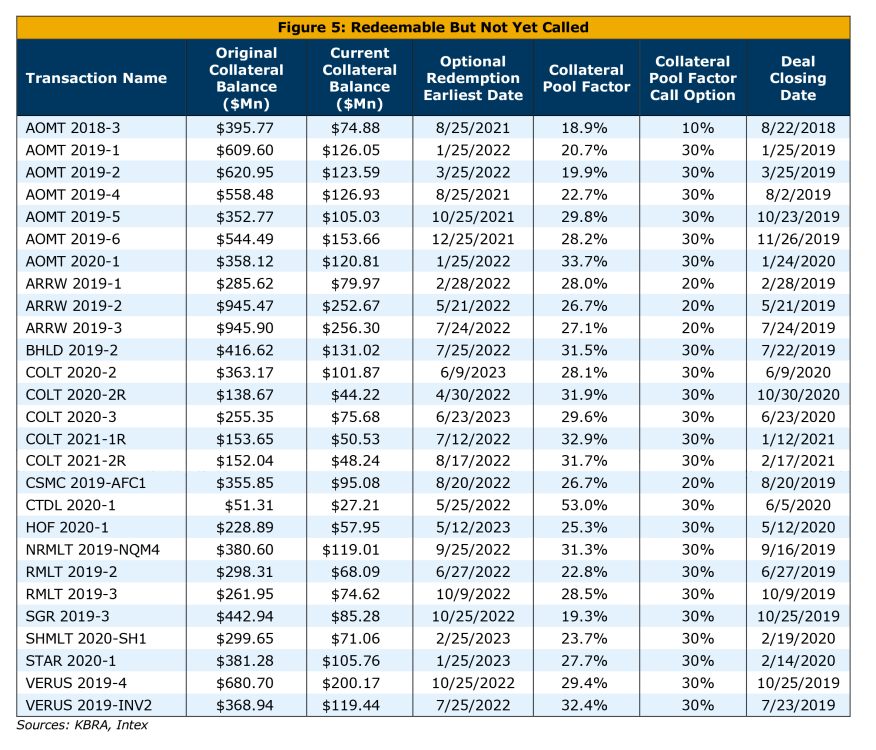 Like refinancing a mortgage, redeeming a securitization affected by volatility of rates.

Homeowners thinking about refinancing their mortgages are growing increasingly reluctant, since mortgage rates have more than doubled in the past year.

Why refinance when the rate on your current mortgage is better than the rate you’d get with a refinanced loan?

In a report issued earlier this month, Kroll Bond Rating Agency LLC (KBRA) noted there is a growing backlog of Non-QM residential mortgage-backed securities (RMBS) that are “callable” or “redeemable,” but have not yet re-entered the market.

According to the report, 27 securitizations, with a combined outstanding balance of just under $3 billion, are redeemable but have not yet been called.

It’s a problem that has grown in the past year, and one that reflects both the volatility of the securities market and the increasingly poor market for securitizing Non-QM loans.

“Notably, only 12 of 31 transactions that became callable based on their earliest optional redemption date were redeemed between August 2021 and September 2022,” the report states, which means 19 were not redeemed. “Additionally, eight more transactions that, though they had not yet reached their earliest optional redemption date, were callable based on their collateral pool factors … were not redeemed.”

‘It’s A Good Chunk Of Loans’

Over $23 billion in Non-QM securitizations were issued in 2019, more than double the previous peak of just over $9 billion the previous year. While 2020 saw a dip in volume due to the onset of the COVID-19 pandemic, the volume issued in both 2021 and through September of this year has surpassed what was issued in 2019, KBRA said.

Non-QM redemptions have occurred since mid-2018, but transactions for securitizations issued in 2019 “have recently become callable and are just now beginning to work their way through the pipeline,” KBRA said. “With some callable transactions yet to be redeemed and other transactions becoming callable in the near future, a redemption backlog is currently building.”

“The backlog is pretty big,” said Daniel Hall, a director in the mortgage group at KBRA. “It’s a good chunk of loans in these deals that could be called that’s not being called. And, typically, it’s really being caused by the general market environment.”

He continued, “Can they (the issuer) get a better deal now in today’s market than they got three years ago when they issued this deal in the first place? Oftentimes the answer is ‘no,’ given the volatility of the markets that we’re seeing.”

Jack Kahan, senior managing director for the Residential Mortgage-Backed Securities Group at KBRA, said redeeming mortgage-backed securities that have already been issued “is somewhat synonymous with the idea that the … recipient of the financing of the loans can refinance those loans at some point in the future. So, just like you might refinance a mortgage, you can do that with your bonds.”

Unlike refinancing a mortgage, however, securitizations can’t be refinanced at just any time. “The bond has to be callable,” Kahan said. “What we’ve seen in the Non-QM space is that when optional redemption provisions do exist, that time period is usually two to three years after the issuance of the debt.”

Securitizations also may be called based on how much of the collateral underlying the bond has been paid down, he said. “We call that the ‘collateral factor.’”

Of the 27 securitizations listed in the report as “redeemable but not yet called,” four list optional redemption dates in 2021; 18 list dates in 2022; and five list dates in the first half of 2023. Of those five, all fall below their collateral pool factor options, which in each case is 30%.

Like Hall, Kahan said issuers of securitizations are much like homeowners considering whether to refinance a mortgage in the current “‘rising rate environment.”

“Anybody who has a mortgage can think about whether they would be refinancing in today’s environment,” he said. “That’s a very similar thought process that issuer might go through. If they are able to refinance a deal in this environment, they’re looking at a very similar economic picture of whether it makes sense to refi now or not.”

In addition to market volatility, another reason for the backlog is that the market for Non-QM securitizations is smaller than for securitizations of qualified mortgages, since government-sponsored enterprises like Fannie Mae and Freddie Mac cannot acquire them. That means the ability to get financing for Non-QM loans through securitizations relies on the private market.

“We’re seeing that even though volumes of origination are declining as mortgage rates have increased, what is being originated typically does need to come to market,” Kahan said. “And we’re seeing that tested now with spreads at where they are …, but that market continues at some level because it may be the only option for financing for some originators.”

In capital markets, the bond "spread" refers to the difference between the amount paid by the issuer of a securitization on bonds purchased by investors above a benchmark rate. For Non-QM loans, the benchmark rate is typically a rate curve referred to as "swaps," which reflects, among other things, investors’ expectations for the benchmark rate.

According to Hall, high spreads mean higher costs to securitize loans, and the spread has risen sharply since the end of 2021.

He added that the backlog “is a symptom of that high-cost-to-securitize environment.”

As the report notes, the current rising rate environment disincentivizes redemption "by reducing the value of existing loans and increasing the required coupon on newly securitized classes."

The report states that the backlog may continue to grow over the near term, but “it may not extend beyond 2023, assuming market conditions stabilize.”

At the same time, it states that delays in redemptions “will compound the volume of loans eligible to re-enter the market down the road, as the 2020 and 2021 securitizations also become eligible for redemption.”