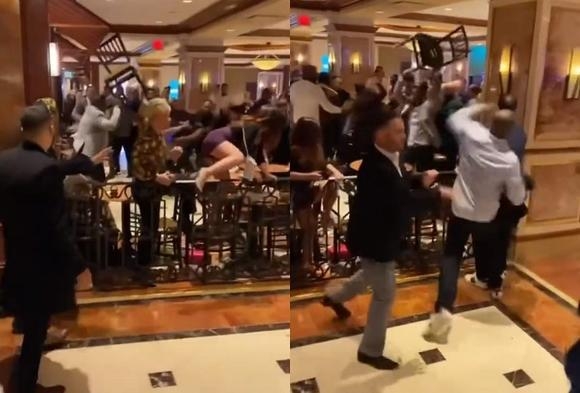 Events took a wild turn last Tuesday when a brawl broke out between two lending companies at the Trade Expo in Atlantic City.

Mortgage conferences and trade expos can be a dull affair when they’re not done right, which is why many try to liven up such events with open bars, celebrity speakers, fun raffle prizes, and enough food to keep you rooted to your seat. Events took quite a wild turn last Tuesday, however, when a brawl broke out between two lending companies at the Trade Expo in Atlantic City, N.J.

Don’t let these pencil-pushing, suit-wearing loan officers fool you – video evidence shows these businessmen know how to pack a punch! The news broke on Twitter when @BeatinTheBookie user said his friend sent him a video of the melee that included people shouting, throwing chairs, pushing tables, and wrestling others to the ground in what appears to be a seating section of a bar. The brawl reportedly took place at Harrah’s Atlantic City casino last Tuesday.

According to multiple sources, the fight did not happen during an official Triple Play event. It is not entirely clear whether the loan officers shown in the video were registered attendees or not. Alternatively, this could have been a networking event (aka party) that companies throw in order to get more business.

“It’s a shame that we are all getting affected by the unprofessional nature that occurs in the industry,” an attendee stated. “Does not represent what this conference was about!”

“A mortgage bank was hosting a party [and] another crew from a mortgage bank showed up wasted and sloppy,” a witness told reporters from Innmann.com. “They got kicked out [and] as retaliation, they waited till the party was over and jumped [the New Jersey brokers].”

“[Lenders] are very strict with not letting other lenders into their parties. They are strictly for thanking existing Realtors for their business as well as [soliciting] new Realtors to work with them,” another witness reported to Innmann.com. “It’s pretty taboo for another lender to crash a competing lenders’ party.”

According to the press of Atlantic City, NJ, police were called to Harrah’s Resort casino at 3 a.m. on Tuesday. They found that at least a dozen people were involved in the brawl between bankers, and at least one person was taken to the hospital to treat non-threatening life injuries.

“Police said the fight had already de-escalated by the time they arrived,” the Post said on Friday. “No arrests were made because no one on the scene wanted to sign a criminal complaint.”