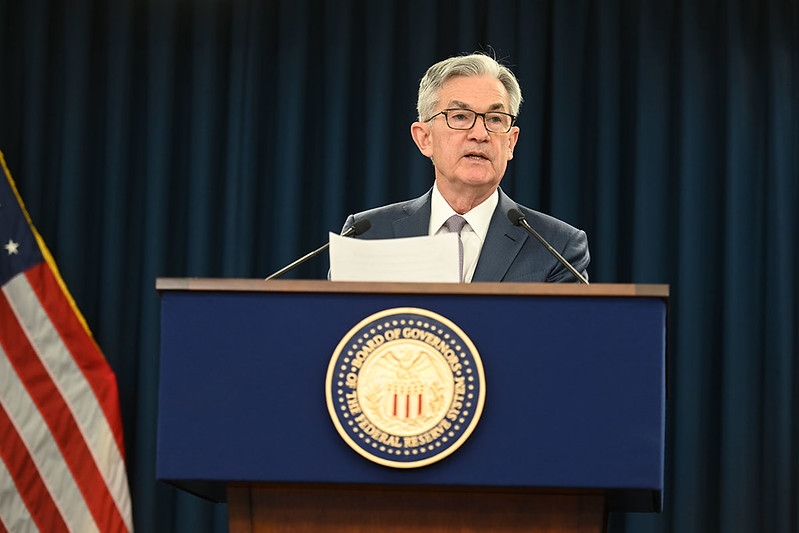 Newly reappointed Federal Reserve Chairman Jerome Powell had a November surprise for Congress on Tuesday, telling the Senate Banking Committee that during its next meeting the Fed will discuss accelerating its tapering of bond purchases.

The Fed’s Open Market Committee is scheduled for a two-day meeting later this month, on Dec. 14-15, and if the committee decides to end its bond-buying sooner than expected, it could also mean it will raise its key short-term interest rate sometime in the first half of 2022.

The Fed, which has been purchasing billions in Treasuries and mortgage-backed securities to boost the economy during the COVID-19 pandemic, announced in November it would begin tapering those purchases by about 14%.

During his testimony Tuesday, however, Powell said the new omicron variant of the COVID-19 coronavirus and the recent rise in cases “pose downside risks to employment and economic activity and increased uncertainty for inflation.” He said greater concerns about the virus also could “reduce people’s willingness to work in person, which would slow progress in the labor market and intensify supply-chain disruptions.”

Last month, Powell had cited key economic indicators that the Fed would closely watch to determine its actions toward tapering and rate increases. Among the key indicators cited as potentially altering its policy were readings on public health, labor market conditions, inflation pressures, and financial and international developments.

At that time, the Fed had said the Committee decided to keep the target range for the federal funds rate at 0 to 0.25%, and that it expects "it will be appropriate to maintain this target range until labor market conditions have reached levels consistent with the Committee's assessments of maximum employment and inflation has risen to 2% and is on track to moderately exceed 2% for some time."

Inflation has not cooperated, though, with consumer prices rising 6.2% in October from the same month last year, the biggest jump since 1990. In his remarks Tuesday, Powell focused more on inflation than the emerging new COVID variant.

“The economy is very strong, and inflationary pressures are high,” he told the committee. “It is therefore appropriate, in my view, to consider wrapping up the taper of our asset purchases ... perhaps a few months sooner.”

Last month, the Committee had said it judges that bond and MBS purchase reductions similar to those announced for November and December likely would be appropriate each month beyond that, but that it was prepared to adjust the pace of purchases if warranted by changes in the economic outlook.

“Chairman Powell indicated that an acceleration of the timetable for the tapering of monthly bond purchases may be warranted, given sustained inflationary pressures, and following his statement government bond yields rose,” Kushi said. “Higher inflation expectations put upward pressure on long-term bond yields, which may result in higher mortgage rates. Higher rates could cool the red-hot housing market by reducing affordability (holding income constant) and causing some would-be buyers to step back.”