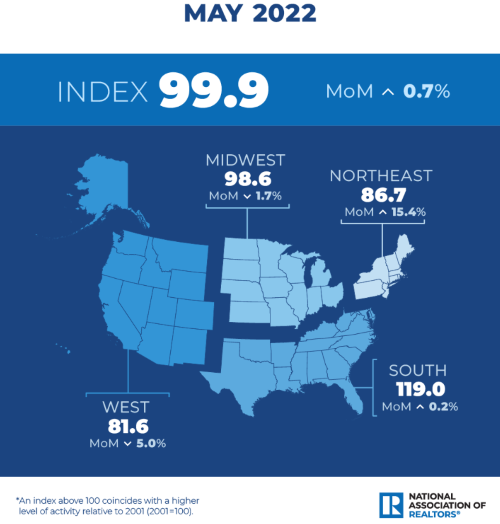 Regionally, month-over-month results were mixed, with pending sales increasing in the Northeast and South while falling in the Midwest and West. Year-over-year, contract activity slid in all four major regions.

The Pending Home Sales Index (PHSI) — a forward-looking indicator of home sales based on contract signings — ticked up 0.7% to 99.9 in May, NAR said. An index of 100 is equal to the level of contract activity in 2001.

NAR Chief Economist Lawrence Yun said that, despite the small monthly gain in pending sales, “the housing market is clearly undergoing a transition. Contract signings are down sizably from a year ago because of much higher mortgage rates."

According to NAR, based on the median single-family home price and with a 10% down payment, the monthly mortgage payment has increased by about $800 since the start of the year as mortgage rates have climbed by 2.5 percentage points since January.

"Trying to balance the housing market by choking off demand via higher mortgage rates is damaging to consumers and the economy," Yun said. "The better way to balance the market is through increased supply, which also helps the broader economy."

While the housing market remains unbalanced nationwide with demand far outpacing supply, Yun said variations in home prices and affordability contributed to the regional differences in pending sales activity in May.

Compared to a year ago, three out of four regions — Northeast, South, and West — posted double-digit pending sales declines.

"The largest decline in contract activity was observed in the West region, where homes are the most expensive," he said. "This further indicates the growing need to increase supply to tame home-price growth and improve the chances of ownership for potential home buyers."