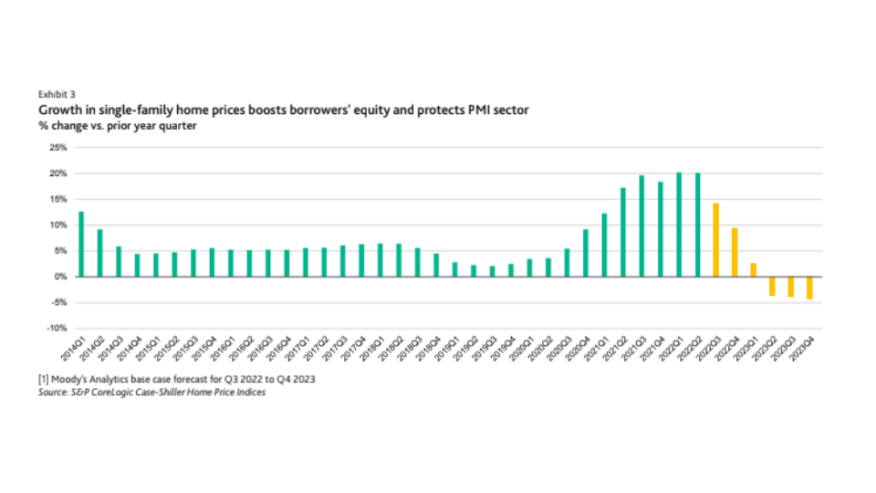 Persistency rates are the percentage of an insurance company's already written policies remaining in force, without lapsing, being replaced by policies of other insurers, or other changes.

Although higher interest rates will lower new business production, they will further improve persistency rates on the mortgage insurers’ in-force portfolios and will support incrementally higher net investment income as new money is invested at higher rates. Capital adequacy remains strong throughout the sector, with firms continuing to return a portion of excess capital to shareholders through dividends and share buybacks.

U.S. housing market fundamentals have been relatively strong. Existing-home prices are expected to increase nationwide by about 8% over the current year before falling off by the end of 2023.

The U.S. housing market is now cooling off, as higher mortgage interest rates and inflation have impacted housing affordability. Yet, labor trends remain strong with the U.S. employment rate of 3.6% in the second quarter of 2022, the lowest reading since the fourth quarter of 2019.

In the second quarter of 2022, pre-tax operating income was up by 10.5% from the previous quarter, as earnings rose following the decrease of loss reserve provisions.

The amount of loans curing continues to outpace new default notices, with total delinquent loans as a percentage of policies in force marking a 27-month low at 1.9%. In the first half of 2022, PMIs generated around $225 billion of NIW, a 19% decrease from the second half of 2021 primarily driven by a decline in refinance activity.

Although there is an increased focus on returning capital to shareholders through dividends and share buybacks, holding company liquidity remains strong at the end of the first half of 2022.