The Reverse Mortgage Refi Boom Is Over 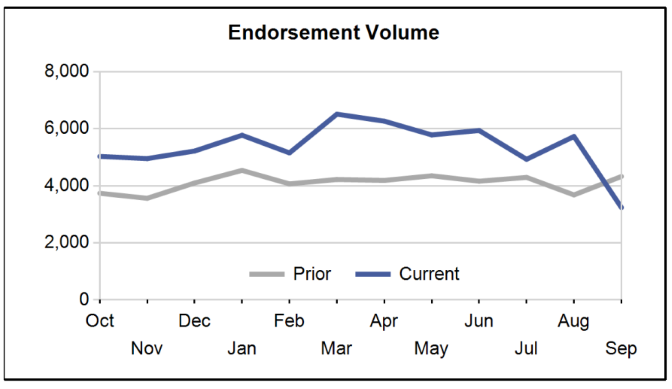 The refinancing boom in home equity conversion mortgages (HECMs) — also known as reverse mortgages — appears to be over.

According to a monthly report by Reverse Market Insight Inc. (RMI), HECM loan endorsements plunged 43.5% in September from August. In addition, the nationwide total of 3,235 endorsements was the lowest in 2.5 years.

“We’ve been talking about the end of the first real refi boom in HECMs for months now and the proof is finally here,” the report states.

The Top 10 lenders also universally posted declines, led by No. 4 Longbridge Financial LLC, which saw a 71.6% decline in September from a month earlier. Mutual of Omaha, the third largest HECM lender, dropped the least, losing just  7.3% month over month. Open Mortgage, at No. 8, was the only other Top 10 lender to decline less than 20%, shrinking 18.5% in September.

American Advisors Group was the top HECM lender with 17,582 for the year through September, nearly triple the total of the No. 2 lender, Finance of America Reverse LLCl. Still, American Advisors saw a 50.2% decline in HECM loans in September from a month earlier.

“The expectation is that refinances have dropped dramatically in September, but any significant weakness beyond that could mean the industry is struggling for traction in positioning reverse (mortgages) alongside HELOCs (home equity lines of credit) and HE loans in inflation/housing/interest rate conditions that should be very conducive to new business,” the report states.