SRE Mortgage Alliance Closed In 4Q 2021, All Staff Laid Off 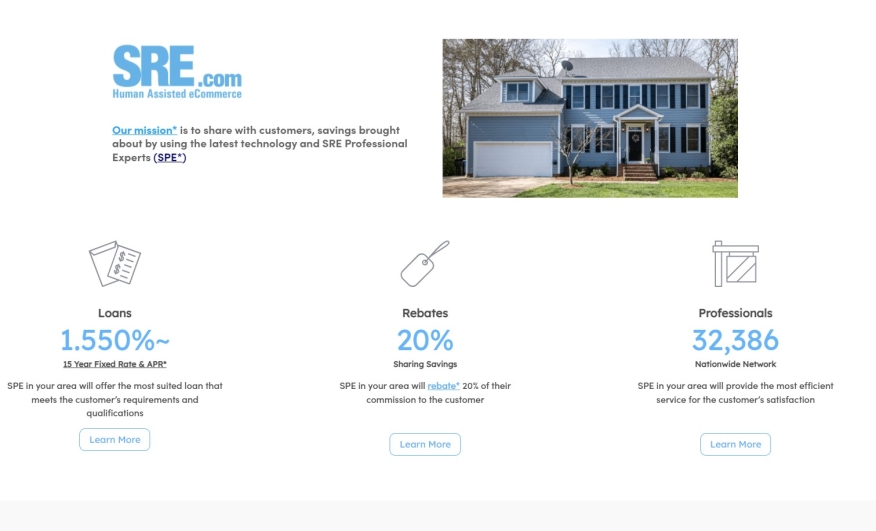 SRE.com is now the website for the former SRE Mortgage Alliance Inc.

SRE Mortgage Alliance Inc., a technology-focused wholesale lender based in El Segundo, Calif., that specialized in residential home loans, closed and laid off its staff in the fourth quarter of 2021.

The company had said last October that it was undergoing a "restructuring and reorganization" that would determine its future and include some layoffs. At the time, a company executive who requested anonymity said SRE owner Takeshi Sekiguchi was at SRE’s office in El Segundo to meet with company officials.

NMP had received a copy of a letter dated Oct. 13, 2021, that was sent to all SRE employees in El Segundo, stating that all staff within the company's wholesale lending division would be laid off effective Nov. 1. The letter stated that employees would receive their final paychecks via direct deposit, and did not offer any other severance.

The letter cited "financial shortfalls due to the low mortgage volume" as the reason for closing the division and terminating its staff.

The spokesman said the letter, which was signed by CEO Rika Jones, was accurate, but added that the actual number of layoffs had yet to be determined. He confirmed that SRE Mortgage Alliance employed more than 50 people at the time but declined to provide a specific number, and said a decision on how many actually would be laid off would be determined by Sekiguchi.

He did not say when a final decision on the reorganization or staffing levels would be made.

This week, following inquiries from NMP, SRE President John G. Stevens said the wholesale division had been eliminated and all employees laid off. He declined to elaborate.

Aubrey Henry, chief of media services for the Employment Development Division in California, a state labor agency, said his agency was never informed about a mass layoff by SRE Mortgage Alliance. Under California regulations, a mass layoff is considered to be any layoff by a manufacturing or commercial facility that affects 75 or more people, which would require the company to file a Worker Adjustment and Retraining Notification, or WARN notice.

SRE would not be required to file a WARN notice if it employed fewer than 75 people.

“The primary means by which we monitor statewide mass layoff activity is through our administration of WARN filings sent to the department,” Henry stated in an email. “We have confirmed with our state workforce group that the department has not received any recent WARN filings from SRE Mortgage Alliance, nor has the department deployed any rapid response teams to the El Segundo area at the current time.”

In addition to eliminating its wholesale lending division, the company also eliminated SRE Mortgage Alliance’s website, sremortgage.com. It now does business at sre.com.

The website touts “human assisted ecommerce” and states, “Our mission is to share with customers savings brought about by using the latest technology and SRE Professional Experts (SPE).” The website offers a link for mortgage loan originators and/or real estate agents to register as an SPE. The site states it has a nationwide network of 32,386 professionals.

Sre.com also offers a 15-year, fixed-rate mortgage at 1.55% for customers who qualify, and has links to connect customers to SPEs who will handle the application and qualification process. It also offers a 30-year, fixed-rate loan at 3.0% Both the 15-year and 30-year fixed rates are for loans up to $500,000. It offers similarly low rates for amounts up to $800,000 and $2 million.

The site also cautions that the rates & APRs “are offered to the highest qualified customers through our investors or lender partners and can change daily. Your fixed rate(s) & APR may be different depending on your qualifications.”

The site also offers rebates on SPEs commissions, stating that “20% of the SPEs fees will be sent back to you!”

A link regarding the company’s mission takes you to information about Sekiguchi, the founder of SRE Technologies Inc. doing business as SRE.com. It says “he has been involved in the U.S. real estate development, investment and management business for the past 50 years.”

It continues, “Learning from his past experiences, he developed the Multi-Solution Platform with various solutions, which returns most of the savings brought about by utilizing the latest technology to the consumers. Our mission is based on this founder’s philosophy.”

Stevens, the SRE president, has not responded to additional requests for comment.