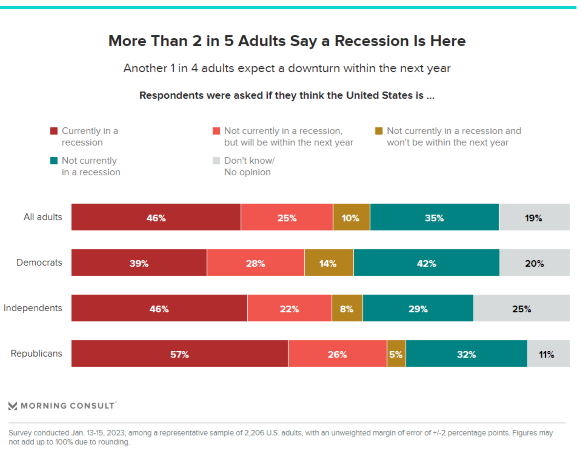 Morning Consult finds many Americans want to take actions to prepare for a recession, but can't.

Economists and business owners can debate all they want about when the U.S. economy will enter a recession. If you ask adults in the U.S., nearly half of them think it already has.

That’s according to a new survey conducted by Morning Consult, which found that 46% of U.S. adults believe the country is currently mired in a recession, while another 25% expect one within the next year.

The survey was conducted Jan. 13-15 among a representative sample of 2,206 U.S. adults, with an unweighted margin of error of plus or minus 2 percentage points, Morning Consult said.

By comparison, 46% of Independents and just 39% of Democrats say the country is currently in a recession, the survey found.

In addition, much of the public wants to prepare for a recession, but says they can’t.

According to the survey, half of U.S. adults said they have not actively taken steps to prepare for a recession, but wish they could.

The latest economic data offered some signs of relief from inflation, even leading some Federal Reserve officials to say they may support easing their interest rate hike strategy. Consumers, though, are still feeling the pain of rising prices. Morning Consult said its latest consumer spending report noted a 4.3% decline in spending in December, with 21.3% of U.S. adults saying their monthly expenses exceeded their monthly income.