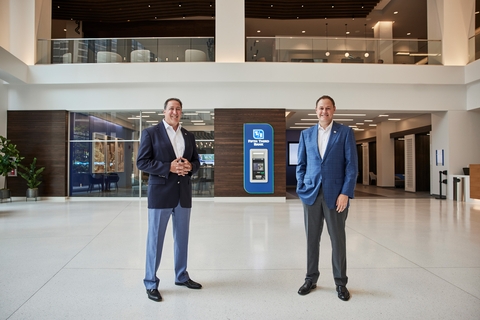 Changes in leadership at Fifth Third.

Tim Spence will become CEO of Fifth Third Bancorp in July when Greg Carmichael retires and becomes a member of the board of directors.

“Tim is an outstanding leader who will continue to build on the bank’s strong momentum, which he has helped create," said Marsha Williams, lead independent director of Fifth Third’s board. "He has been an integral part of the leadership team since 2015, helping develop the strategies that Fifth Third is executing with excellence through innovation, technology, and citizenship. Tim has brought resilience throughout the pandemic that has been instrumental.”

Spence said, “Fifth Third is a great company because of our people, because we serve strong communities, and because we believe to the core that our customers’ needs, their opportunities and their well-being are our chief concern.”

Williams also thanked Carmichael for his service. “Since becoming our CEO in 2015, Greg led the transformation of Fifth Third into one of the most successful and respected banks — a top performer among its peers and one of the world’s most ethical companies,” he said. “We are fortunate and grateful that Greg will continue to serve as Fifth Third’s executive chairman as we implement the strong succession plan we have developed.”

Carmichael said now is the right time for the transition. “Together, we have worked to be the One Bank people most value and trust, and I am incredibly proud of what we have accomplished," he said. "The board and I are confident the time is right to transition the role of CEO, given Fifth Third’s strong financial health and performance, and Tim is well-prepared to succeed in this role. I look forward to supporting Tim and the entire team as they continue to lead our industry and Fifth Third through exceptional products, innovation, dedication and service.”

Spence joined Fifth Third in 2015 as chief strategy officer. Prior to being named president in 2020, he was head of consumer bank, payments, and strategy. In that role, he was responsible for Fifth Third’s retail banking, mortgage, auto, and specialty lending and payments business lines, as well as key strategic growth capabilities such as digital, marketing, strategy, and fintech partnerships. Prior to joining Fifth Third, Spence was a senior partner in the financial services practice at Oliver Wyman, a global strategy and risk management consulting firm.

In 2018, American Banker recognized Spence as Digital Banker of the Year, an award shared with top forward-thinking leaders from the nation’s largest and most dynamic financial institutions.

Originally from the Pacific Northwest, Spence and his family make their home in Cincinnati.

Kristy Fercho has been company’s head of Home Lending since 2020.