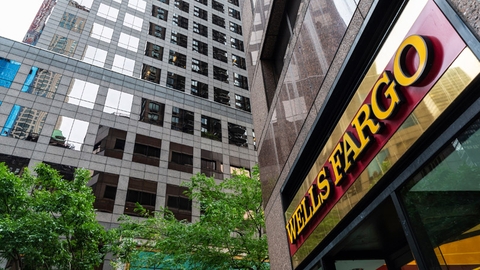 Hurt by operating losses due to legal & regulatory issues, and by falling mortgage originations.

Wells Fargo & Co.’s earnings continue to take a hit from its legal problems, as well as from the slowing housing market.

On Friday, the nation's third-largest bank reported net income of $3.53 billion, or 85 cents per diluted share, down 31% from the same quarter last year.  After adjustments, the bank earned $1.30 per share, which beat analysts estimates of $1.09 per share.

The bank said its results were ”significantly impacted” by $2 billion, or 45 cents per share, in operating losses related to “a variety of historical matters, including litigation, customer remediation, and regulatory matters.”

It continues to operate under federal consent orders related to its 2016 scandal over the creation of fake customer accounts.

The bank also set aside $784 million as a provision for credit losses, after reducing its provision by $1.4 billion in the same quarter last year.

Home lending overall totaled $973 million, down 52% YOY on lower mortgage banking income, driven by lower originations and gain-on-sale margins, as well as lower revenue from the resecuritization of loans purchased from securitization pools, the bank said.

The housing market has slowed as mortgage rates have soared since the third quarter of last year. Rates this week increased to 6.92%, the highest level in 20 years and more than double the 3.05% rate a year earlier.

That affected Wells Fargo, which saw home lending originations fall 59% to $21.5 billion from a year earlier.

The bank has eliminated 322 jobs at its home-lending division in Iowa so far this year.

Wells Fargo CEO Charlie Scharf said the bank’s top priority “remains strengthening our risk-and-control infrastructure, which includes addressing open historical issues and issues that are identified as we advance this work. As we have said several times, we remain at risk of setbacks as we work to complete the work and put these issues behind us and expenses this quarter reflect our ongoing efforts.”

Regardless, he said, the bank “is positioned well, as we will continue to benefit from higher rates and ongoing disciplined expense management.”

He added that, “Both consumer and business customers remain in a strong financial condition, and we continue to see historically low delinquencies and high payment rates across our portfolios. We are closely monitoring risks related to the continued impact of high inflation and increasing interest rates, as well as the broader geopolitical risks, and while we do expect to see continued increases in delinquencies and ultimately credit losses, the timing remains unclear.”