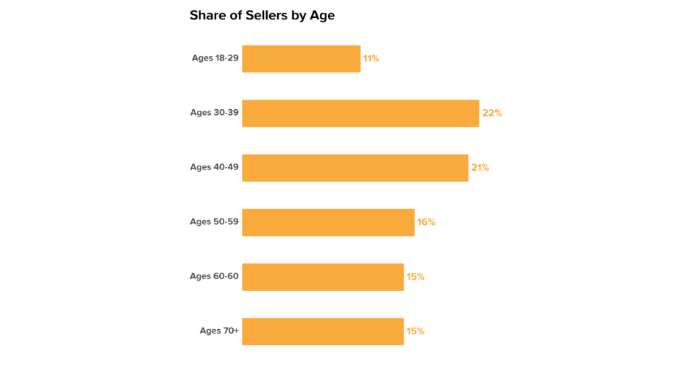 Zillow found that the typical U.S. seller is 46 years old, and that about 12% of sellers are in their 20s or younger. The report’s data broadly showed that most sellers are partnered, married, or previously married, have at least some college education, and are most likely to sell a home in the South.

Three quarters of sellers are non-Hispanic white or Caucasian, which is higher than the overall share of the U.S. adult population that is white (63%).

Consistent with the past four years, the typical seller received two offers, but a notable share reported receiving more than that. Almost a quarter of sellers reported getting at least four offers, continuing the upward trend from 14% in 2020. Since 2019, the share of sellers that report selling without any offers (sellers who forgo the traditional selling process, often selling to friends or family) fell 11 points from 14% in 2019 to 3% in 2022.

Despite the rise of digital options like remote viewings, 3D tours, and instant offers, Zillow found that sellers’ use of a real estate agent has remained high over the last three years. The typical seller still holds only one open house, but the share that forgo an open house entirely fell in the past year: 33% said they had none in 2022, compared to 43% in 2021. Two-thirds of sellers reported they never take their home off the market until it is sold.