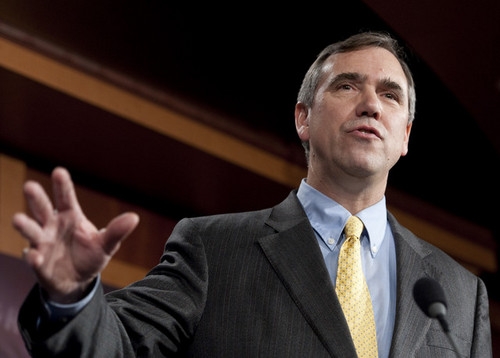 Oregon Sen. Jeff Merkley has offered a new plan to tackle underwater mortgages. In a white paper containing the proposal, called “The 4% Mortgage: Rebuilding American Homeownership,” Sen. Merkley lays out a plan to allow underwater homeowners who are current on their mortgages to refinance to a lower interest rate.  “Four years ago, the U.S. government acted quickly and boldly to rescue major financial institutions. However, we have not done nearly enough for American families who are struggling with the downturn in the housing market,” said Sen. Merkley. “There are millions of Americans trapped in high-interest mortgages, and that's not just bad for them, it's bad for neighborhoods hit by foreclosures and it's a huge anchor on our economy. A bold solution to help these families refinance is the fastest way to get our economy back on track.” Sen. Merkley's plan, which would not require taxpayer dollars, but does anticipate the federal government selling bonds to investors to raise funds, is projected to turn a profit over its lifetime, according to models and stress-tests of the underlying assumptions. The Senator, who serves on the Senate Banking Committee and was once the executive director of Habitat for Humanity in Portland, spent over six months developing the proposal and consulting with experts. “America’s economic recovery is being held back by $700 billion in negative equity in the housing market,” said Dr. Joseph Stiglitz, professor of economics with Columbia University. “Millions of homeowners are unable to refinance, because they are underwater on their mortgage and their loan does not carry a government guarantee. Sen. Merkley’s broad refinance proposal would allow these families to refinance into loans with a lower interest rate, freeing consumer resources to be spent on other important needs, or allowing the homeowner to rebuild equity more quickly. If adopted, this proposal would help to stabilize the housing market, create new jobs, and boost our overall economy.” More than one-fifth of American homeowners are currently underwater. They are therefore unable to take advantage of historically low mortgage rates and are at much greater risk of default and foreclosure. Merkley's plan would create a new, temporary government-backed trust to purchase mortgages issued by private lenders that meet the program's criteria. After refinancing, average underwater homeowners would, depending on the option they chose, see their monthly payment drop sharply or dramatically cut the amount of time before they begin building positive equity in their home. In the plan, Sen. Merkley calls for the plan to be piloted immediately, a step that could be taken without new legislation from Congress. The proposal envisions a role for the Federal Reserve, Federal Housing Administration (FHA), or other agency to create the new trust. “Sen. Merkley’s proposal would develop a trust to purchase mortgages from loan originators and investors to offer refinance tools that either help homeowners rebuild equity quicker, lower their monthly payments, or ease the payment burden on severely underwater mortgages,” said 2012 National Association of Realtors (NAR) President Moe Veissi. “That is exactly the innovative approach that our nation must take to ensure a sustained housing recovery.”
Link copied
Published
Jul 27, 2012
Coming Up See All
Dec
01
How to Qualify Foreign National Borrowers with Acra Lending’s Investor Cash-Flow Program
Webinar
1:00 PM ET
Dec
02
Certified Military Home Specialist Course - Basic Training
Webinar
11:00 AM PT / 2:00 PM ET
Dec
07
OriginatorTech
Virtual
•
11:00 AM ET
Get the Daily
Advertisement
Advertisement
Analysis and Data
IMB Production And Profits Improve In The Third Quarter