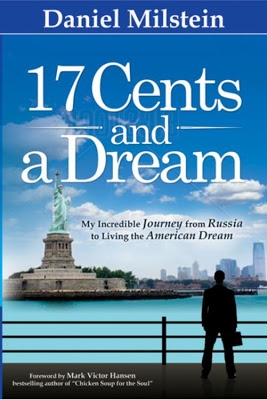 Sales of 17 Cents and a Dream: My Incredible Journey from the USSR to Living the American Dream by Daniel Milstein—founder, president and CEO of Gold Star Mortgage Financial Group—surged during its first week of availability last week ranking number one on the Amazon list of best-sellers. The book is Milstein's story about how his mother, father and brother escaped the oppressive government of the USSR and immigrated to the United States, ranking number one on Amazon's list of the best-selling Kindle eBooks in the Business and Entrepreneurship category, number two in the Business and Investing category and in the top 30 in the Biography and Memoir category. Born in Kiev, Ukraine, Milstein and his family experienced undue hardship, religious persecution and life-and-death situations all in the shadows of the greatest nuclear accident that ever occurred; the Chernobyl nuclear meltdown which killed more than 100,000 people including his grandfather. "Through pure determination, fortitude and attitude, Daniel pulled out of impossibly difficult situations," said Mark Victor Hansen, best-selling author of Chicken Soup for the Soul. "His story is true, his story is a personal inspiration to me and I hope it will inspire you too to maximize your potential and go for the greatest of dreams." 17 Cents and a Dream begins with a gripping account of the Milstein family's tough life in Kiev, Ukraine under the oppressive government of the former Soviet Union. He recalls how he and his family were affected by the 1986 explosion of the Chernobyl nuclear power plant: Daniel was 10-years-old at the time, and the disaster took place only 78 miles from their home, killing 100,000 people and spreading poisonous radiation throughout the environment. A few years later the family, struggling against poverty, government oppression, and anti-Semitism, made a secret plan to flee to America. After a narrow escape, the family arrived in Ann Arbor, Mich. with no understanding of English and few belongings. Young Daniel had only 17 cents in his pocket, given to him by a friend to cover the expense of a postage stamp so that Daniel could send him a letter. In the ensuing years, Daniel endured extreme poverty, endless hunger, relentless bullying from his new classmates all while working long hours mopping floors and cleaning restrooms at a McDonald's. "None of this came easy ... in school after working my morning shift at McDonald's, I was painfully aware that I smelled like a quarter pounder with cheese," said Milstein. "I was always tired, but I was also proud that I was able to take care of my family and to make something of myself, to honor the wishes of my grandfather." Milstein's work ethic and relentless determination fueled his success. After graduating from college, he worked for various financial institutions and was consistently promoted. Milstein's courage and sheer willpower continued to drive him as he began to build upon his success in the world of finance, working harder and longer than anyone else, until eventually opening and growing his own billion-dollar company, Gold Star Mortgage Financial Group.
Link copied
Published
Feb 12, 2013
Coming Up See All
Jan
26
Mortgage Leadership Outlook: Karl Jacob
Webinar
1:00 PM PT
Jan
27
Making Money in Non-QM
Webinar
1:00 PM ET
Feb
08
Texas Mortgage Roundup — Austin
Austin, TX
Get the Daily
Advertisement
Advertisement
Analysis and Data
Funding For Multifamily Affordable Housing Reaches Its Highest Volume In 2021