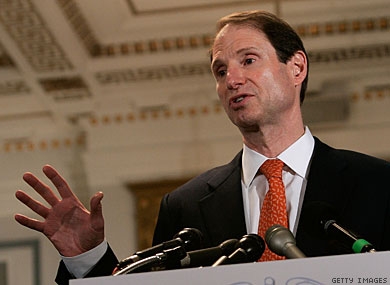 U.S. Sen. Ron Wyden (D-OR) has urged the U.S. Attorney General to investigate allegations that a mortgage servicing firm is overcharging struggling homeowners on default and foreclosure fees. “Not only is the thought of making it harder for struggling homeowners to reinstate their loans appalling, but charging for fees already being paid by a government-backed entity such as Fannie Mae is illegal under the False Claims Act,” Sen. Wyden wrote in a letter to Attorney General Eric H. Holder Jr. Wyden explained that a long-time professional in the mortgage industry recently contacted his Portland, Ore. district office to raise concerns about overcharging homeowners for service fees associated with default and foreclosures. Wyden said that he has been unable to determine the total or average added cost, but said that “given the number of Americans facing default or foreclosures, it could be considerable.” Mortgage investors contract banks and other entities to service their investments. In exchange for a portion of the interest homeowners pay on their mortgages—typically one to three percent of the total interest payment—servicers are responsible for collecting payments and for “default servicing,” which can include property preservation, sending breach of contract letters and completing claim forms. Legal fees are the only expense not covered through homeowners’ interest payments and are the only cost that can legally be passed back to investors and homeowners. Industry experts told Wyden’s staff that Lender Processing Services Inc. (LPS) provides default services to banks and mortgage companies. LPS then partners with law firms, which, in turn, pass along “legal fees” to investors or homeowners which are never fully detailed or explained. Neither the homeowners nor investors are made aware that the broadly claimed “legal fees” may include the cost of services that have already been paid for out of the homeowners’ interest payments. “Borrowers are simply told that they need to come up with more money to save their homes,” said Sen. Wyden in the letter.
Link copied
Published
Mar 11, 2013
Coming Up See All
Jan
26
Mortgage Leadership Outlook: Karl Jacob
Facebook Live
•
1:00 PM PT
Jan
27
Making Money in Non-QM
Webinar
1:00 PM ET
Feb
08
Texas Mortgage Roundup — Austin
Austin, TX
Get the Daily
Advertisement
Advertisement
Analysis and Data
CREFC Board Shows Significant Shift In Outlook For 2022