The latest FNC Residential Price Index (RPI) shows U.S. home prices have increased another 0.8 percent from July to August. The latest trend—as of August—marks a 30-month rising streak since 2012. Based on recorded sales of non-distressed properties (existing and new homes) in the 100 largest metropolitan areas, the index increased 7.5 percent from the same period in 2013—unchanged when compared to July’s year-to-year rate—amid a persistent slowdown in the annual rate of home price appreciation.

As of August, completed foreclosures comprise about 11 percent of total existing home sales. In the for-sale market, preliminary data from September and October shows that the average asking price discount and time-on-market (TOM) have hardly changed in the last six months: the discount is only slightly above two percent, while the TOM remains at about three months. 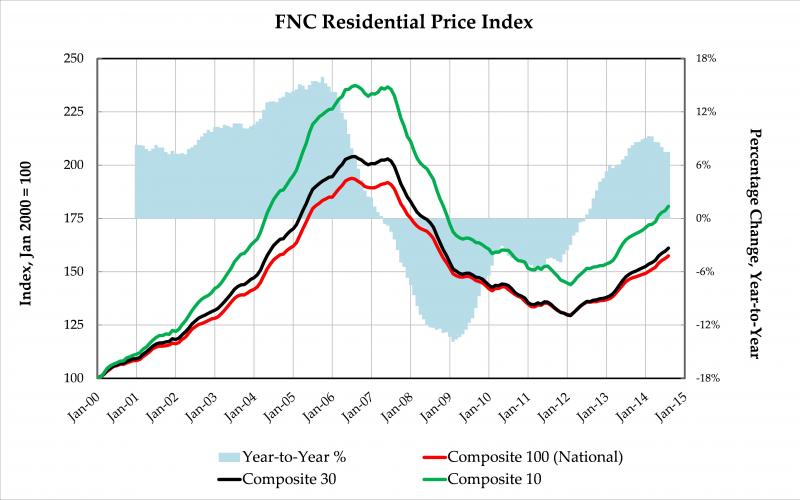 The chart below shows the latest price trends for each MSA in the FNC Composite 30, tabulated separately based on month-to-month, year-to-year, and 2012-to-date cumulative price recovery. 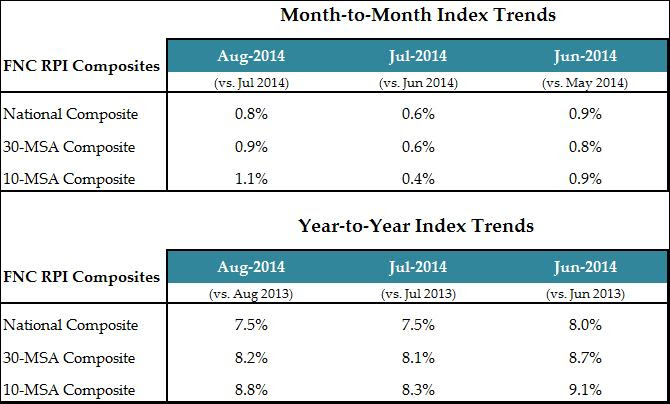 Prices were up in 22 of the 30 cities tracked by the FNC 30-MSA composite index, led by Cleveland (2.6 percent), Los Angeles (2.6 percent), Dallas (2.5%), and Columbus, OH (2.1%). Orlando, St. Louis, and New York also showed a strong August month, rising 1.9%, 1.8%, and 1.8% respectively. The Sacramento and San Francisco markets took an unexpected turn, down 2.6% and 2.1%, respectively. This is the first time since the recovery took hold in February 2012 that home prices in San Francisco declined from the previous month. A third California city—Riverside—also recorded nearly a half percentage decline.

On a year-to-year basis, a third of the cities in the FNC 30-MSA composite index continue to see home prices appreciating rapidly, ranging from 9.6 percent in Phoenix to 17.4 percent in Riverside. Only Cincinnati and St. Louis continue to show year-to-year price declines. 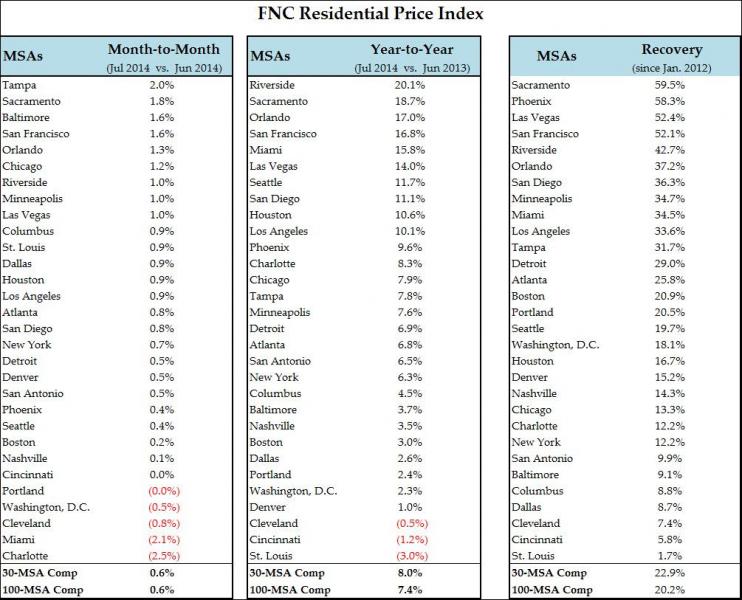