HOPE NOW has released its October 2014 loan modification data, finding that an estimated 39,000 homeowners received permanent, affordable loan modifications from mortgage servicers during the month. This total includes modifications completed under both proprietary programs and the government’s Home Affordable Modification Program (HAMP). HOPE NOW has also restated all data points for 2014. In October, data was received from an additional servicer going back to January. This will affect all previous data reports for 2014. As the industry has consolidated, thousands of loans have transferred between servicers, which has resulted in the need to capture data from the servicers who have taken over the servicing rights of these loans.

Of the permanent loan modifications completed in the month of October, an estimated 29,000 were through proprietary programs and 10,023 were completed via HAMP.

Delinquencies of 60 days or more were under two million—at approximately 1.91 million. This represented a slight decrease (2.3 percent) from the previous month (1.96 million). Delinquency data is extrapolated from data received by the Mortgage Bankers Association (MBA) for the third quarter of 2014. 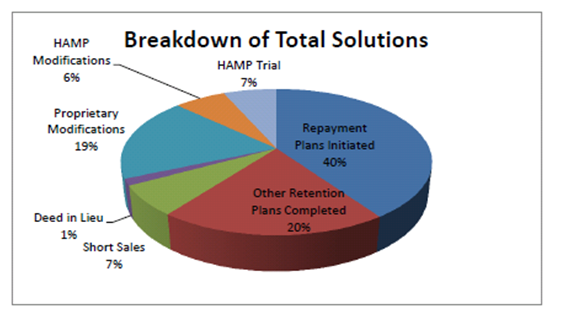 ►Short sales: Approximately 10,400 completed in October vs. 9,700 in September—an increase of eight percent.

►Deed in-lieu: Approximately 2,300 completed in October vs. 2,200 in September—an increase of seven percent.