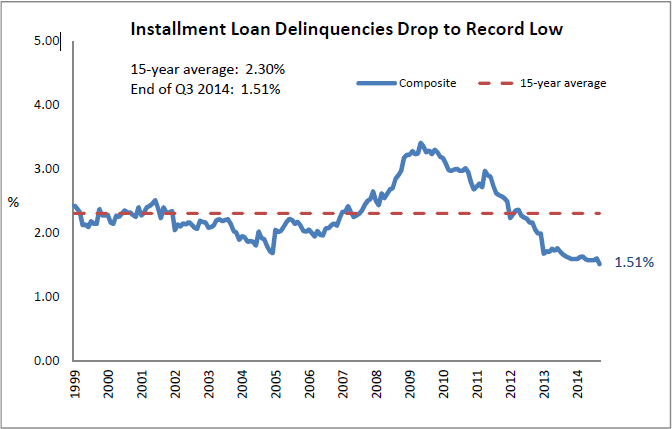 Delinquencies continued to decline in last year’s third quarter, falling in seven out of 11 categories as the economy improved and consumers responsibly managed their finances, according to results from the American Bankers Association’s (ABA) Consumer Credit Delinquency Bulletin. The composite ratio, which tracks delinquencies in eight closed-end installment loan categories, fell six basis points to 1.51 percent of all accounts—a record low that is well under the 15-year average of 2.30 percent. The ABA report defines a delinquency as a late payment that is 30 days or more overdue.

“Strong economic growth has boosted job creation and supported income growth, which has made it easier for consumers to meet their financial obligations,” said James Chessen, ABA’s chief economist. “Lower gas prices helped free up resources for everything from new purchases to debt repayment."

Bank card delinquencies ticked up slightly in the third quarter following two consecutive quarters of declines, rising eight basis points to 2.51 percent of all accounts. They remain well below their 15-year average of 3.77 percent.

“Bank card delinquencies have hovered near 15-year lows with only minor fluctuations over the past two years, and we expect that trend to continue,” said Chessen, who noted that bank card delinquencies have varied by only 14 basis points since the fourth quarter of 2012. “While people are clearly ready to spend again as economic activity picks up, the overwhelming majority of consumers continue to keep debt at manageable levels.”

Delinquencies in two of the three home-related categories—property improvement loans and home equity loans—continued their downward trend in the third quarter, falling to 0.82 percent and 3.24 percent, respectively. Delinquencies for home equity lines of credit edged up slightly, rising two basis points to 1.52 percent.

“As the housing market continues its slow and steady recovery, home-related delinquencies are following a parallel track,” said Chessen. “Increased home prices have eased pressure on consumers, but stresses can still occur, particularly as home equity lines reach the fully amortizing period and payment requirements rise. Banks continue to work with customers to ensure they can meet their obligations.”

Chessen is optimistic about the future as the economy continues its upward trend and consumer confidence improves.

“Consumers are on surer financial footing, which bodes well for future delinquency rates,” Chessen said. “Consumers are smiling every time they fill up their tanks.  Every one-cent decline in pump prices puts about $1 billion back into consumers’ pockets, which means their paychecks are going much further. The signs are pointing in the right direction, but consumers hold all the cards when it comes to continuing to prudently manage their finances.”

The third quarter 2014 composite ratio is made up of the following eight closed-end loans. All figures are seasonally adjusted based upon the number of accounts.