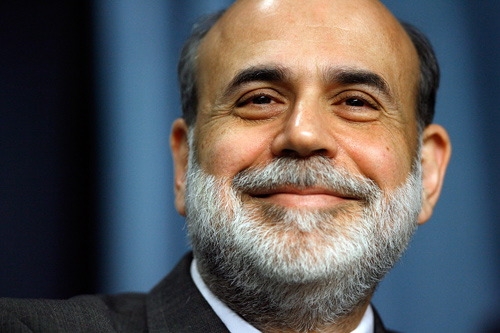 Former Federal Reserve Chairman Ben Bernanke has completed his first week in his new job as a blogger on the Brookings Institution Web site, launching his online career with a three-part posting titled “Why Are Interest Rates So Low?” But in the course of his writing, Bernanke appeared to shift the answer to his self-posed question away from the Federal Reserve policy makers and into multiple directions–with an unexpected hit on a former economic policy-maker in the Clinton and Obama Administrations.

In the first part of his blog, Bernanke insisted that “low interest rates are not a short-term aberration, but part of a long-term trend,” adding that “10-year government bond yields in the United States were relatively low in the 1960s, rose to a peak above 15 percent in 1981, and have been declining ever since.” He then mounted a defense of Fed policy by writing, “The Fed’s ability to affect real rates of return, especially longer-term real rates, is transitory and limited. Except in the short run, real interest rates are determined by a wide range of economic factors, including prospects for economic growth—not by the Fed.”

“Larry’s proposed solution to this dilemma is to turn to fiscal policy—specifically, to rely on public infrastructure spending to achieve full employment,” Bernanke wrote. “I agree that increased infrastructure spending would be a good thing in today’s economy. But if we are really in a regime of persistent stagnation, more fiscal spending might not be an entirely satisfactory long-term response either, because the government’s debt is already very large by historical standards and because public investment too will eventually exhibit diminishing returns.”

The day after Bernanke’s comments on Summers, the Brookings Institution gave Summers a chance to respond on Bernanke’s blog page. For his part, Summers was polite in his response, agreeing to disagree with Bernanke’s assertions.

“It may be that growth will soon take hold in the industrial world and allow interest rates and financial conditions to normalize,” Summers wrote. “If so, those like Ben who judged slow recovery to be a reflection of temporary headwinds and misguided fiscal contractions will be vindicated and fears of secular stagnation will have been misplaced.”

Bernanke’s third and final blog on the subject by spreading the blame for low interest rates on what he considered to be a “glut” of global savings that is clogging up the international economic environment.

“If a global savings glut is the cause, then the right response is to try to reverse the various policies that generate the savings glut—for example, working to free up international capital flows and to reduce interventions in foreign exchange markets for the purpose of gaining trade advantage,” he wrote.

Bernanke published his blogs between March 30 and April 1, and he has yet to add additional postings. However, he did state this would not be a daily commentary. “Now that I’m a civilian again, I can once more comment on economic and financial issues without my words being put under the microscope by Fed watchers,” he wrote. “I look forward to doing that—periodically, when the spirit moves me—in this blog.”