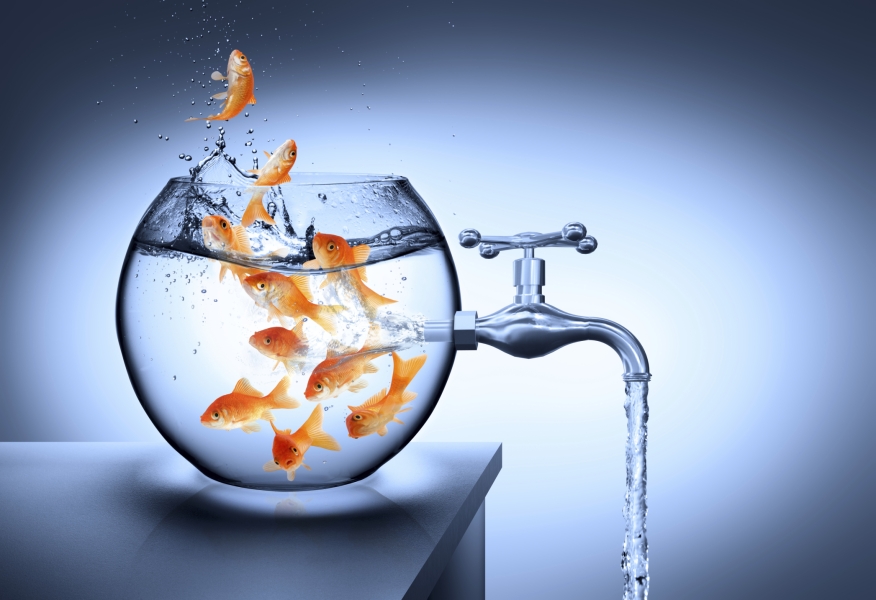 Have you ever tried to teach a goldfish to tap dance?

No, that would be an incredibly stupid waste of time.

Well, that’s how I feel about teaching leadership skills to employees. They either have them or they don’t. Why bother teaching someone something, when there are so many people that already have the deep-seated ability naturally. My practice has always been to set up systems to let people like this to naturally float to the surface. This way, I can recognize current abilities rather than trying to force the unnaturally abilities onto others that don’t have them.

Let me give you an example:

I started out in Virginia, so when my company grew, naturally the majority of my employees worked and lived in Virginia. I decided, in order to build an Esprit de Corps, I would hold “Bowling Party” once every six months at a local bowling alley near the main office. This way, my loan officers would mingle, exchange information and help one another. A cross flow of information helps fertilize an organization. The Bowling alley setting was relaxed, alcohol could be served, employees could invite their families and most of all, I could smoke inside during the party.

One day, I got a call from Todd, a branch manager in West Virginia. He was my biggest producer there, had hired many of our top people and was a super nice guy. He asked if it was okay with me if he sponsored a bowling party there in West Virginia, since it was too far to drive for many of his employees. I was floored. None of our other branch managers in any of our other states had even thought of that. Heck, I never thought of that. This guy was a born leader. I not only agreed, I told him I would come, pay for it all and later promoted him to national production manager. You might say he just bubbled to the surface.

Do you ever wonder how a king gets to be a king? I don’t mean that they inherit the crown; I mean the first one in a long line. This is how I figure it. Here is a village where basically, there are no leaders. One guy, or gal, comes up with an idea. “Hey, these barbarians keep invading our village, why don’t we make some swords and protect ourselves?” Or maybe their crops are failing. “Why don’t we all take turns digging a ditch and irrigate our crops?” I really think it comes down to a really smart person who comes up with ideas that help benefit the group. After a while, the village starts thinking, “Wow, those are some pretty good ideas, why don’t you be in charge of that.” Such, leadership is created.

Many of us see a need or something wrong that needs to be fixed. Most of us might be too shy or just can’t be bothered to fix it. It is the few that say, “Hey, would it not be better if we did I this way?” that are your organization’s leaders. But, many owners are not open to that type of progressive thinking or even acknowledge that as leadership. Like I said earlier, you must create an organization with systems that let people like this to naturally float to the surface. A good start is a “suggestion box.” Another good idea is NOT to bite the head off of someone criticizing your current systems.

I don’t care what type of organization you have, the ages, sexes or races of your employees, you currently already have some of them that would make good leaders. It is just YOU who do not recognize them in the sea of workers. Do you want to find one? Try this little test. Create a form or a rule that purposely has a flaw in it. See who has the chutzpah to tell you it is wrong. That will be your leader. If everyone is afraid to tell you there is a mistake, then it is YOU who is the problem and you should not be leading them. Good leadership begins at the top. A good leader will attract other good leaders. A bad leader will … basically, end up flushed down the toilet.