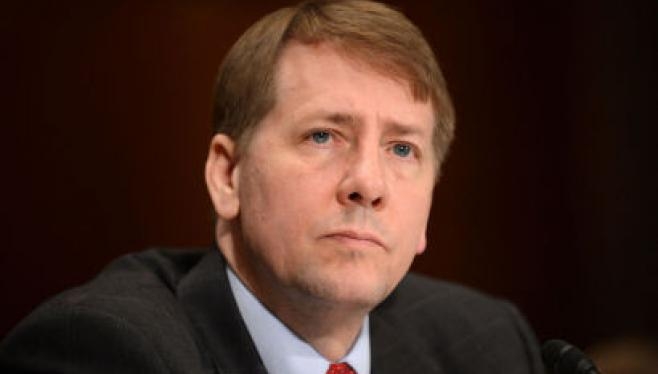 In a very rare appearance before the nation’s largest mortgage industry trade group, Consumer Financial Protection Bureau (CFPB) Director Richard Cordray congratulated himself for predicting the success of his agency’s rules and guidelines, while warning that marketing servicing agreements (MSAs) could be the next big target of his rulemaking team. But perhaps the most striking aspect of the speech involved what was not included in the text: Cordray made no mention regarding several ongoing controversies that have frayed the CFPB’s relationship with the financial services world, while threatening the agency’s set-up and Cordray’s job.

In prepared remarks delivered before the Mortgage Bankers Association’s Annual Convention in San Diego, CFPB Director Cordray insisted that “unsupported hyperbole” surrounding the potential problems connected to the Qualified Mortgage (QM) and Ability-to-Repay (ATR) rules could not obscure the CFPB’s insistence that these changes were necessary.

“And it turns out we were right,” Cordray said. “The rules have now been in place for almost two years, and none of those anxious concerns have come true. In fact, recent Home Mortgage Disclosure Act (HMDA) data from the Federal Financial Institutions Examination Council (FFIEC) confirms the very opposite. In 2014, the first year of our new rules, home purchase mortgages increased by 4.6 percent. For jumbo loans, most of which are non-QM loans, the rate of increase was substantially higher and, so far as we can tell, there has yet to be a single case brought against a lender for making such a loan. The overall upward trend appears to have accelerated over the first half of this year. And while we saw minor consolidation in some parts of the mortgage market, there is no evidence of any mass exodus, as the doomsayers predicted.”

Cordray also took aim at MSAs, announcing that the CFPB considered these to be problems that could be the focus of the agency’s next round of regulatory solutions.

“The Bureau’s experience in this area gives rise to grave concerns about the use of MSAs in ways that evade the requirements of RESPA,” Cordray continued. “In consequence, we have reiterated that a more careful consideration of legal and compliance risk arising from these agreements would be in order for anyone that participates in the mortgage industry, including but not limited to lenders, brokers, title companies, and real estate professionals. This review is especially warranted insofar as whistleblower complaints about legal violations with MSAs have been increasing. Our enforcement actions against companies and individuals for violations of RESPA have resulted in more than $75 million in penalties to date, almost all of that arising from the payment of improper kickbacks and referral fees. We will remain active in scrutinizing the use of such agreements and related arrangements in the course of our enforcement and supervision work.”

Cordray offered a brief acknowledgment that the CFPB was not infallible, claiming that “no set of rules is perfect” and insisting that “one of the hallmarks of the Consumer Bureau is our openness to learning about the impact of our rules and making adjustments where the evidence indicates that we may have missed the mark.”

However, Cordray made no mention of the current tensions that have shaken the CFPB’s relationship with mortgage professionals, most notably the controversies surrounding the agency’s online complaint database and the proposed ban on so-called “free pass” arbitration, as well as Cordray’s refusal to extend a grace period following the TRID rule implementation that would protect lenders from heavy-handed enforcement actions. Nor did his speech touch on efforts by other trade groups and a growing number of legislators to refashion the CFPB in a manner that would eliminate his job in favor of a bipartisan commission.

Cordray’s speech, which included a great deal of time in a selective recollection of problems facing the housing market in the years following the 2008 crash, stood in stark contrast to the speech delivered earlier in the day by MBA President and CEO David H. Stevens, which urged the Washington power elite to stop dredging up the past as a justification of demonizing the mortgage profession.

“Regulators and legislators at all levels must recognize that we are operating today in the safest lending environment in history,” said Stevens. “As I’ve said many times, leaders in Washington should be taking a victory lap for creating a process that is safer and more transparent for consumers. Continuing to focus on the past will not allow our housing economy to move forward. The country wants to move forward—borrowers want to borrow and lenders want to lend. We need to get the balance back between enforcement and encouragement.”

Another speaker at the MBA Annual Convention, Michael Stegman, counselor to the Secretary of the Treasury for Housing Finance Policy and a major adviser to President Obama, also looked at the future of housing policy and announced that it was temporarily postponed. Stegman used his speech to dismissively question the motives of those seeking an end to federal conservatorship of the government-sponsored enterprises.

“None of us should be misled by the increasingly noisy chorus of the advocates of recap and release, many of whom have placed big bets against reform so they can make a profit, and are doing everything they can to make sure that those bets pay off,” said Stegman, referring to the calls by investors to conclude the seven years of conservatorship. “Nor should their promise that recap and release would generate a pot of money for affordable housing be taken seriously.”