Mortgage Network Raises Funds in Run for the Troops 5K 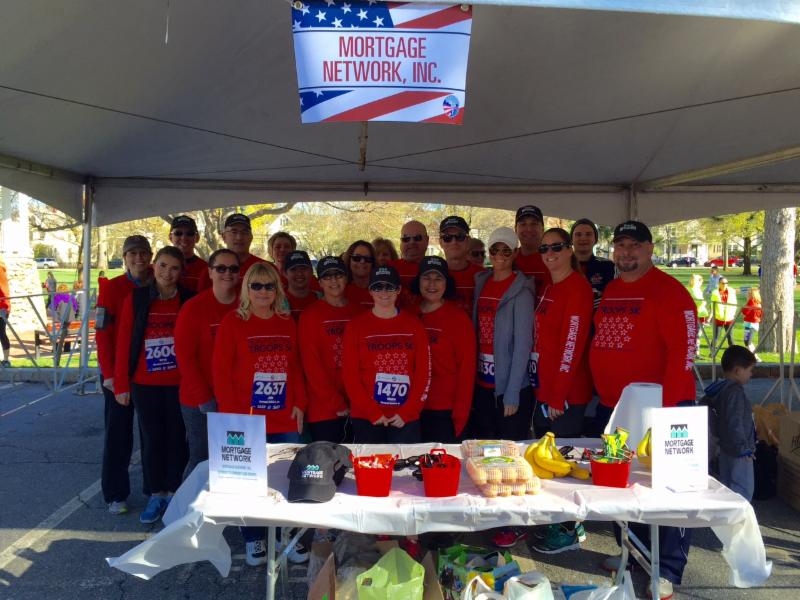 Forty-four employees and friends from nine offices of Mortgage Network Inc. participated in the recent Run for the Troops 5K in downtown Andover, Mass., that will help build a new custom home for a wounded Connecticut soldier.
Proceeds from the event will enable Homes for Our Troops to build a mortgage-free, specially designed home for Marine Corporal Roger Rua of Middlebury, Conn., who was injured in the line of duty in Afghanistan in 2012. The vehicle Rua was riding in drove over a command-detonated improvised explosive device (IED) in Helmand Province, Afghanistan. Rua sustained fractures to his spine, femur and sternum, as well as traumatic brain injury as a result of the explosion. Initially paralyzed from the chest down, Roger was able to walk again using only a cane following months of physical therapy.
"Mortgage Network was proud and privileged to help Roger by participating in last Sunday's Run for the Troops 5K in Andover, Mass.," said Robert McInnes, president of Mortgage Network. "Roger's story is truly inspirational, as are those of all of the many other veterans that have been helped by Homes for Our Troops. I know I speak for all of our employees that being involved in the run was incredibly rewarding."
Race proceeds also help military families through Fisher House Boston and Brides Across American organizations as well as help soldiers with PTSD through the military programs at Ironstone Farm.
"It was great to see so many people come together to support our veterans," said William R. Kelly, a loan officer in Mortgage Network's Danvers Square, Mass., branch and a U.S. Coast Guard veteran. "Many thanks to all of the sponsors who donated time, effort and money to support this great cause."
Link copied
Published
May 01, 2017
Coming Up See All
Nov
10
Motor City Mortgage Expo
Detroit, MI
Nov
18
Texas Mortgage Roundup – Houston
Houston, TX
Dec
09
California Mortgage Expo – Irvine
Irvine, CA
Get the Daily
Advertisement
Advertisement
Analysis and Data
Foreclosure Starts Dip Despite End Of Federal Moratoria