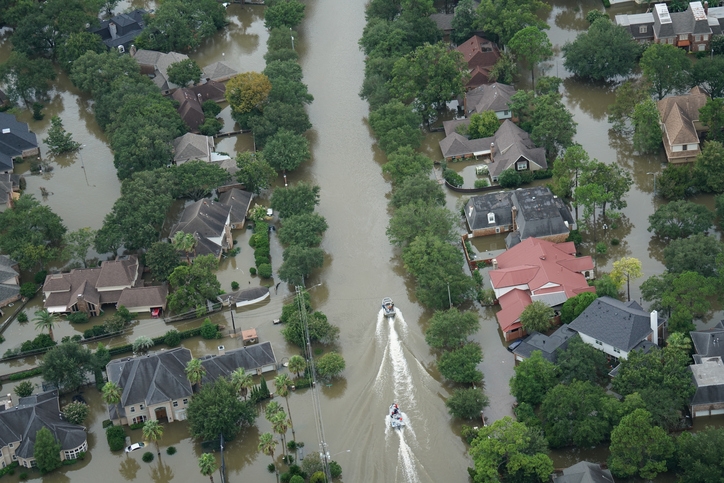 The devastation left behind by Hurricane Harvey could result in 300,000 new mortgage delinquencies, with 160,000 borrowers becoming 90 days or more past due, according to a new forecast from Black Knight Financial Services (BKFS).
This new forecast is based on a comparison to the 2005 damage left by Hurricane Katrina, when mortgage delinquencies in FEMA-designated disaster areas across Louisiana and Mississippi soared by 25 percentage points and peaked at over 34 percent. The areas impacted by Harvey have twice as many mortgage properties as those impacted by Katrina—Black Knight estimated there are 1.18 million mortgaged properties in Hurricane Harvey-related FEMA disaster areas, with $179 billion in unpaid mortgage balances.
However, Black Knight Data & Analytics Executive Vice President Ben Graboske noted the federal government has some buffers in place to block a potential mortgage catastrophe.
“Thankfully, Fannie Mae, Freddie Mac and the Federal Housing Administration have all announced temporary moratoria on evictions and foreclosure sales in Harvey-related disaster areas,” Graboske said. “With these three organizations accounting for nearly 900,000 of mortgaged properties, the moratoria should help temper the negative effects. Forbearance plans will help as well, though interest on the mortgage will continue to accrue under any of these efforts.”
Link copied
Published
Sep 08, 2017
Coming Up See All
Sep
23
Today’s Borrowers and Their Credit Scores: Findings from a New Research Study
Webinar
1:00 PM ET
Oct
07
Colorado Mortgage Summit
Denver, CO
Oct
12
California Mortgage Expo – San Francisco
San Francisco, CA
Get the Daily
Advertisement
Advertisement
Analysis and Data
August New Home Purchase Mortgage Applications Fell 17% YOY