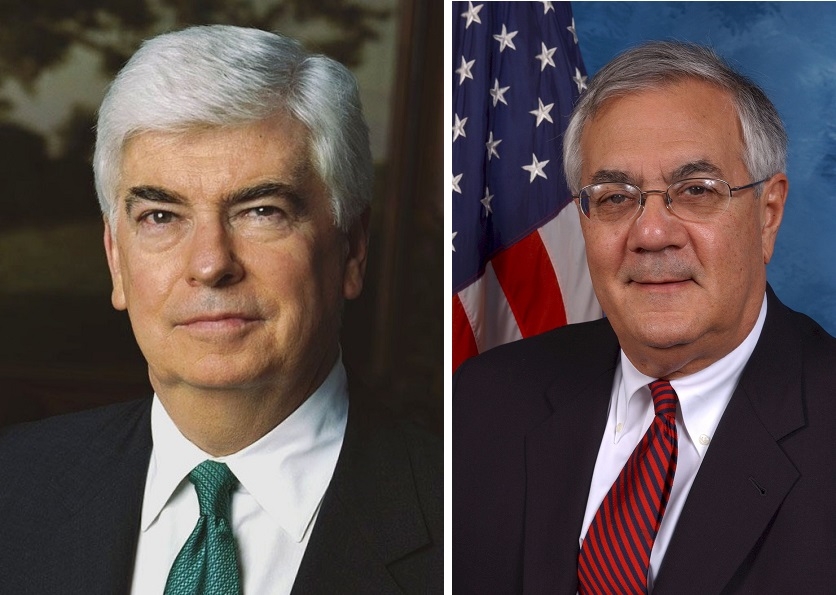 The co-authors of the Dodd-Frank Act reunited to condemn a federal court’s ruling that President Trump had the right to appoint an Acting Director at the Consumer Financial Protection Bureau (CFPB).
In a media call sponsored by the left-wing Progressive Change Institute, former Sen. Chris Dodd (D-CT) and former Rep. Barney Frank (D-MA) insisted that their 2010 legislation was specifically tailored to the Vacancies Act of 1998 when it came to filling the vacancy left by a departing CFPB Director.
“It was our very clear our intent—and the legislative history will reflect this—that after considering the choice of the Vacancies Act to provide for the director to appoint a temporary director who would be a professional person within the Bureau who was committed to protecting the agency and consumers’ financial services,” said Dodd. “That was our intent, without any question. We had the choice to use the Vacancies Act, but we rejected that choice and wrote the language which is in the bill.”
“I am puzzled by the notion that when there’s an existing law that Congress then passes a new law which on the very point at issue takes a different position than the existing law, that it’s not only a different position, but it’s carrying out the mission that Congress had in mind, which Sen. Dodd clearly pointed out,” added Frank. “This was not a random choice. This was a choice that we made very deliberately of a specially tailored approach in this case to carry out this version of the law. The notion that that was merely a suggestion on our point and that the President could pick and choose what he wanted—that makes no sense.”
On Tuesday, U.S. District Court Judge Timothy Kelly upheld President Trump’s appointment of Mick Mulvaney as Acting Director of the CFPB, and cited the unprecedented nature of having a regulator—in this case, outgoing CFPB Director Richard Cordray—name his own successor rather than have the President fill the position.
"Denying the President's authority to appoint Mr. Mulvaney raises significant constitutional questions," Kelly said.
Dodd added that he believed Mulvaney, a longtime critic of the CFPB, was appointed with the goal of dismantling the agency.
“The idea that we may have a temporary Director who may be there for a long time who’s vehemently opposed to this agency and vehemently opposed to this bill, of course, is a great disservice,” Kelly said.
Adam Green, Co-Founder of the Progressive Change Institute, took Dodd’s criticism several levels higher.
“The public is paying attention and considers this a coup on the main agency set up to advocate for consumers against powerful interests,” Green said. “And we will not allow a sabotage from within the CFPB by Mick Mulvaney and Donald Trump like we’ve seen attempted by Scott Pruitt at the EPA and Betsy DeVos at the Department of Education.”
Link copied
Published
Dec 01, 2017
Coming Up See All
Sep
28
DealDesk: Introduction to Acra Lending's Light Doc Programs
Webinar
2:00 PM ET
Sep
29
How to Win with Non-Delegated Correspondent - Key Insights on the Model and Fulfillment Solutions
Webinar
2:00 PM ET
Oct
06
How to Use Credit as A Strategic Tool to Attract More Leads, Make Better Offers and Close More Loans
Webinar
2:00 PM ET
Get the Daily
Advertisement
Advertisement
Military Lending
Saluting Military Lenders And Originators