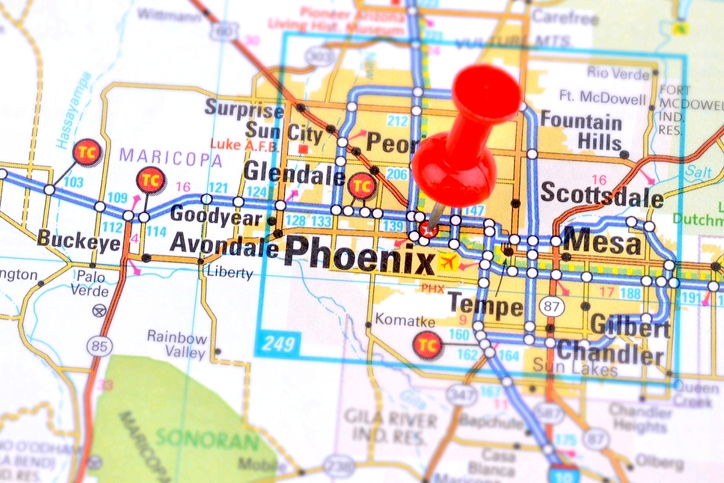 An increased number of people were searching to move to another metro area in the first quarter, according to new data from Redfin.
During the first three months of this year, 25 percent of Redfin’s home searchers were scanning other metro areas, up from 23 percent one year ago. The national share of home-searchers looking to relocate is tied from the highest level on record with the fourth quarter of 2018.
Phoenix took the top spot on the list of metro areas being scouted for relocation, with a net inflow of 7,949, the highest level on record for any metro area to date since Redfin began reporting net migration data in early 2017. The share of homebuyers searching in the Phoenix metro area from other metro areas also hit a new high of 34.5 percent in the first quarter, surpassing the previous peak of 34 percent in the second quarter of 2018.
"It is pretty rare for me to meet a home-buying client who was born or raised in Phoenix or even elsewhere in Arizona," said Phoenix-area Redfin agent Heather Corley. "So many people are coming here from expensive cities like Los Angeles, San Francisco and Seattle for our low cost of living and great weather. The trend is really increasing lately thanks to strong job growth and companies such as Allstate, Intel, Boeing, Microsoft and Facebook moving to the area."
Redfin Chief Economist Daryl Fairweather said, "People are feeling more confident about the economy and now feel financially secure enough to make a cross-country move to a metro where their money will go further. Homeownership may be out of reach for current residents of San Francisco or New York, but there are plenty of affordable homes and lower taxes in places like Phoenix, Atlanta and Austin. As more workers move to these places, there is a chicken and egg phenomenon where more companies open offices, which attracts even more workers."
Link copied
Published
May 07, 2019
Coming Up See All
Oct
06
How to Use Credit as A Strategic Tool to Attract More Leads, Make Better Offers and Close More Loans
Webinar
2:00 PM ET
Oct
11
California Mortgage Expo – SF/Oakland
San Francisco, CA
Oct
13
Close More Loans for Self-Employed Borrowers
Webinar
2:00 PM ET
Get the Daily
Advertisement
Advertisement
Analysis and Data
The Kids Want To Be Homeowners