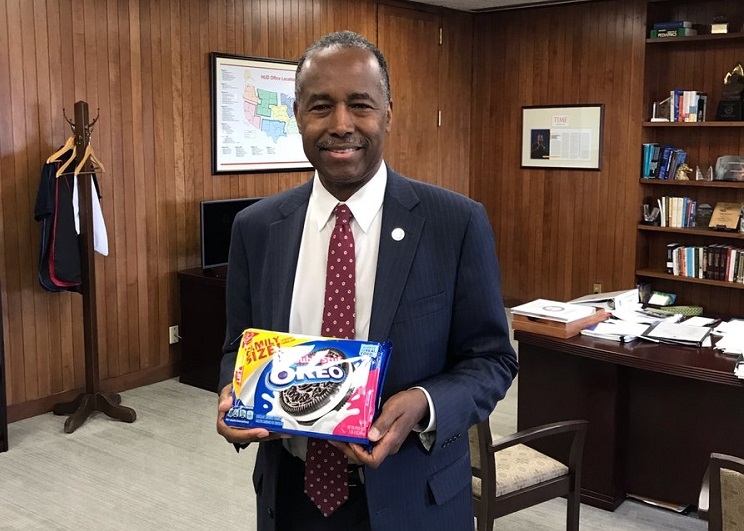 The House Financial Services Committee briefly took on the vibe of an Abbott and Costello routine as U.S. Department of Housing & Urban Development (HUD) Secretary Ben Carson and Rep. Katie Porter (D-CA) got into a confused tangle over a housing industry acronym.
During the hearing, Porter asked Carson about “the disparity in REO rates” and then added if Carson knew what an “REO” is. Carson looked at Porter and asked, “An Oreo?” Porter quickly corrected the HUD chief by stating, "No. Not an ‘Oreo.’ An ‘R-E-O.’ An R-E-O."
Carson volunteered to define the acronym, but got it two-thirds correct, asking if the first two letters stood for “Real Estate” before incorrectly identifying the final letter as standing for “Organization.” Porter corrected him again, explaining, “Owned, Real Estate-Owned. That's what happens when a property goes to foreclosure. We call it an ‘REO.’”
For his part, Carson good-naturedly acknowledged his gaffe on Twitter by posting a photo of himself with a bag of Oreos and another photo of a cookie bag he was sending to Rep. Porter. “OH, REO!” he tweeted. “Thanks, @RepKatiePorter. Enjoying a few post-hearing snacks. Sending some your way!”
Link copied
Published
May 21, 2019
Coming Up See All
Oct
06
How to Use Credit as A Strategic Tool to Attract More Leads, Make Better Offers and Close More Loans
Webinar
2:00 PM ET
Oct
11
California Mortgage Expo – SF/Oakland
San Francisco, CA
Oct
13
Close More Loans for Self-Employed Borrowers
Webinar
2:00 PM ET
Get the Daily
Advertisement
Advertisement
Analysis and Data
The Kids Want To Be Homeowners