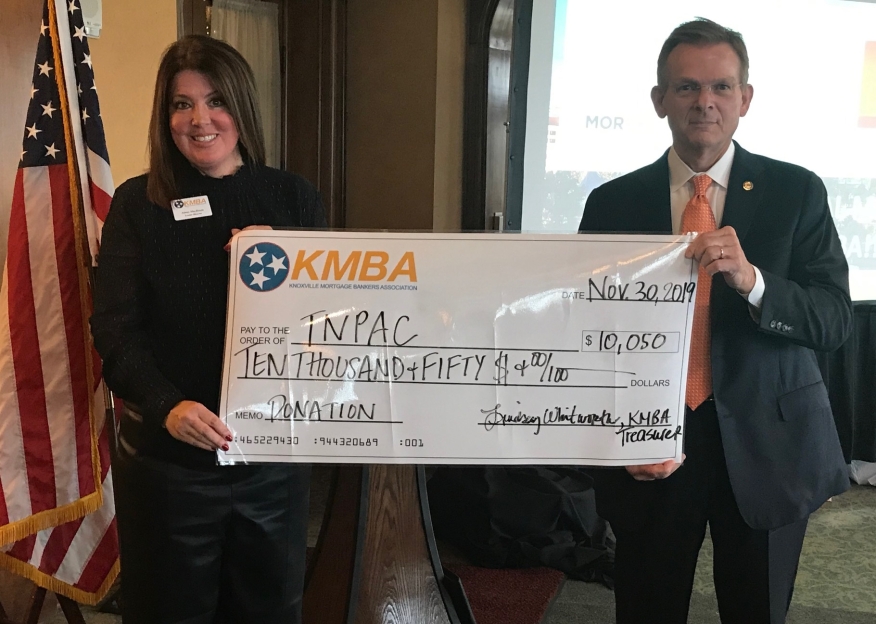 The Tennessee Mortgage Bankers Association (TNMBA) raised more than $15,000 for TNPAC through their first annual statewide fundraising competition.
“The Knoxville Mortgage Bankers Association (KMBA) absolutely crushed it by raising over $10,000,” said Jeff Tucker, president of TNMBA. “As a result, they earned the first-ever Aimee McIlveen TNPAC Fundraising Award. This initiative resulted in more than doubling the balance in TNPAC and easily exceeded our fundraising goal for the year.”
According to Tucker, the new fundraising award is named for Aimee McIlveen because the competition was her idea–and she was fairly confident which chapter would lead the way this year. He said that TNMBA identified a need for more advocacy funding, but had not determined an actionable plan to succeed. Aimee suggested that competition among the local chapters would work–and she was certainly right.
“Legislative advocacy is arguably the most important aspect of TNMBA’s mission,” Tucker said. “It is part of TNMBA’s heritage and a crucial part of our mission. Ernest P. Schumacher, who founded TNMBA 60 years ago, was also the founder and first chairman of MORPAC, the National MBA’s political action committee. Advocacy is part of the DNA of TNMBA. This new funding will allow our lobbyist, Tony Thompson, to be more effective in his efforts representing the mortgage banking profession to members of the Tennessee General Assembly.”
Link copied
Published
Dec 18, 2019
Coming Up See All
Oct
06
How to Use Credit as A Strategic Tool to Attract More Leads, Make Better Offers and Close More Loans
Webinar
2:00 PM ET
Oct
11
California Mortgage Expo – SF/Oakland
San Francisco, CA
Oct
13
Close More Loans for Self-Employed Borrowers
Webinar
2:00 PM ET
Get the Daily
Advertisement
Advertisement
Analysis and Data
The Kids Want To Be Homeowners