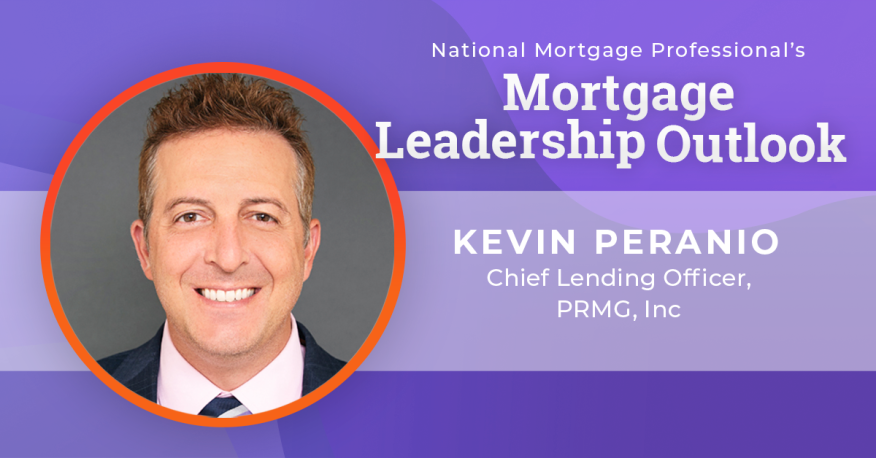 Wednesday’s edition of the Mortgage Leadership Outlook series featured Kevin Peranio, chief lending officer for Paramount Residential Mortgage Group (PRMG), and host Andrew Berman, head of engagement and outreach for National Mortgage Professional magazine, chatting about the state of the industry as the coronavirus pandemic continues to impact the nation.
As the COVID-19 outbreak continues to pose challenges for the mortgage industry, the Mortgage Leadership Outlook series looks to help mortgage professionals navigate through these times of uncertainty.
Peranio joined PRMG in 2010, overseeing all production for the company and earned the company's Southeast Region the ranking as the top region. His goal is to maintain a positive customer experience for all who do business with PRMG. He was also recognized by NMP as a member of the 40 Under 40.
Somewhat ironically, Peranio joined Berman for their discussion from Corona, Calif., the site of PRMG’s headquarters.
Peranio is well-known in the industry for his LinkedIn page, as his more than 5,000 followers and ongoing videos attract hundreds of viewers. He developed his LinkedIn series as an effective way to answer the scores of calls for info that pepper his day.
“People just kept coming to me and asking me [about lots of mortgage issues]," said Peranio. "If I just put out a video on LinkedIn, it will save me 4,000 conversations a day.”
It wasn’t difficult to launch the video, nor was it cumbersome to get viewers. “Think about how much time you have your eyeballs on stuff during the day,” Peranio said, when you consider social media, television, emails and memes. “Add up all that time and it is hours every day. A 10-minute LinkedIn video? People are consuming this. They want to hear it. People want information. It doesn’t have to be shiny.”
Overcommunication isn’t a bad thing in difficult times, Peranio advises. “I just started talking with my webcam. Any one of us can do that.”
Here’s something else interesting about the videos. Peranio is known for sharing information in them that could give PRMG a competitive advantage if he kept the analysis for internal use. Yet, his partners have never asked him to hold back except for one thing.
“My CEO did give me one pushback: ‘Do you have to say what time it is?’” said Peranio, an acknowledged night owl, who is known for recording his videos in the wee hours. His CEO said, “Are people going to think we’re going out of business when you say its 1 a.m.?”

►Fintech is not going to rush in and replace local loan originators. “That was the big fear before. What this health crisis and recession shows now more than ever is that people want to talk to a local originator … to steer them through this mess. There is nothing better for a consumer than a local originator.
►PRMG has not experienced dark days during the pandemic. “We don’t think this was as bad as 2008,” Peranio said, explaining the company is well-capitalized and has an experienced leadership team. “It wasn’t scary for us because we could service our own loans and build our cash book. We’ve been servicing for over a decade.”
►Cash is what is helping PRMG most to weather this crisis. “We’re serial savers here. We have saved our cash and money for this event,” said Peranio. PRMG, by the way, just came off a record month with $1.3 billion in originations in April. “Companies with tons of cash are doing well right now and are reaping the rewards."
►Peranio predicts that, in spite of the current fiscal concerns most people face, 2020 can still be a great year for originators. “Every single person in this industry can double their production over 2019 or triple or quadruple. It’s all out there. There’s that much business.”
Previous guests in the Mortgage Leadership Outlook series include Mat Ishbia, Christine Beckwith, David Luna, Barry Habib, Rob Chrisman and more. See all the interviews from the Mortgage Leadership Outlook series on its YouTube channel and check out the full episode of Mortgage Leadership Outlook with Peranio and Berman below.
Link copied
Published
May 14, 2020
Coming Up See All
Dec
07
OriginatorTech
Virtual
•
11:00 AM ET
Dec
09
California Mortgage Expo – Irvine
Irvine, CA
Jan
13
Non-QM Summit
Uncasville, CT
Get the Daily
Advertisement
Advertisement
Analysis and Data
Property Insurance Costs Poised to Rise from Climate Events — And Not Only On The Coasts