Banosian Shares What It Takes To Be A Top Tier LO 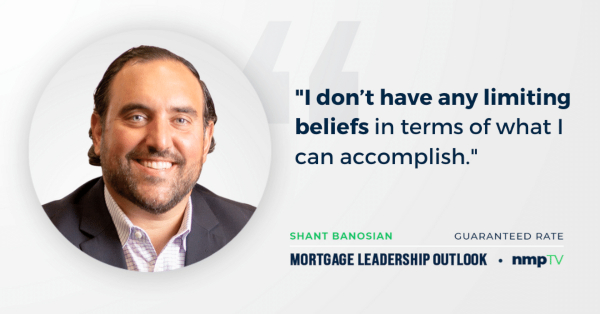 Shant Banosian, Guaranteed Rate's No. 1 loan officer, appeared on Wednesday’s episode of the Mortgage Leadership Outlook. Banosian joined series' host Andrew Berman, head of engagement and outreach for National Mortgage Professional Magazine as they discussed how he went from being a good producer to a great one, his daily habits, and how he plans on taking his business to the next level.

Banosian is Guaranteed Rate’s No. 1 loan officer nationwide five years running, with 1,907 closed units and $915 million in funded loans in 2019. In 2020, he broke all industry records hitting a billion dollars in production (and the year isn't over yet). He has more than a decade of experience in the mortgage industry and has an impressive career volume of more than $2 billion in funded loans. Banosian's impressive run was covered in National Mortgage Professional Magazine's November 2020 edition.

See the entire episode below.