About 6M U.S. Homes Not Suitable To Live In: Porch 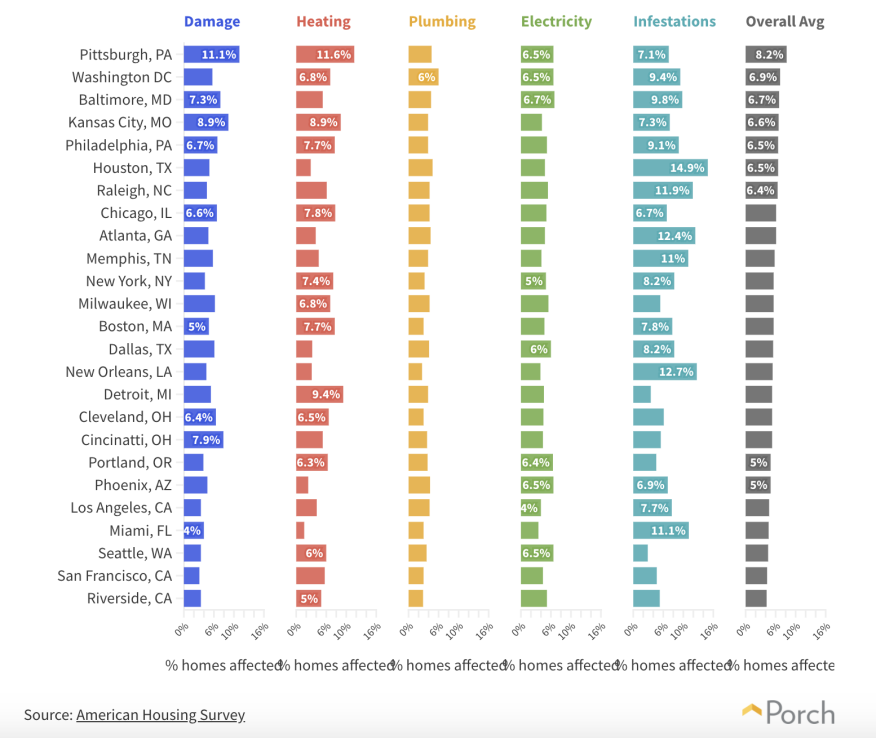 One in 20 American homes don’t meet the standard of “a suitable living environment," as defined by the Department for Housing and Urban Development (HUD), according to a new report from Porch. That equates to around 6 million unsuitable homes in the U.S.

Homes deemed “inadequate” are those that meet certain criteria for poor living conditions, according to HUD. The inadequacies include structural damage, lack of heating or plumbing, electricity, and infestations.

Porch looked at the average percentage of homes that experience at least some serious issues related to the inadequacies listed above. Pittsburgh was the unfortunate "winner" of the ranking, with 8.2% of homes being plagued with serious problems.

Over 11% of homes in Pittsburgh have some kind of structural damage, according to Porch’s report. This includes cracks in the foundation, holes in floors and walls wider than a dime, and leaks from outside the structure. Every fifth home (21%) in the Steel City has a leaky roof, basement, window, or door, resulting in water damage.

Following Pittsburgh, Kansas City, Mo. (9%) and Cincinnati (8%) are the cities most likely to have homes with structural damage issues.

On the flip side, cities with the most structurally intact housing are all on the West Coast. Portland, Ore.; Seattle, and three Californian cities (Riverside, Los Angeles, and San Francisco) have 4% or fewer homes affected by issues of structural damage.

About 6% of homes in the United States go cold for 24 hours or more over the course of a winter. The typical causes of heating problems are equipment breakdown (39%), utility interruption (20%), inadequate insulation (12%), and inadequate heating capacity (11%), Porch said.

In Pittsburgh, the share of homes with inadequate heating is double the national average, as 12% of its homes have been uncomfortably cold for at least 24 hours in the past year.

Kansas City — where almost 9% of homes go cold in the winter — also ranks towards the top of the list, but in third place after Detroit (9.4%).

According to the American Housing Survey, plumbing problems typically present as leaky pipes, stoppages to water supply and sewage disposal, and flush toilets not working properly.

On average, about 3% of American homes experience these issues regularly. However, in Washington, D.C., these issues are twice as likely to affect its residents, with 6.6% of its homes presenting severe plumbing problems.

The city where plumbing seems to be most in order is New Orleans, with only 2.7% of homes facing serious plumbing concerns, despite its legacy of hurricanes and flooding. Riverside, Calif., was a close second with 2.9% of homes facing plumbing problems.

Exposed wiring and fuses that regularly blow are the most common electrical problems in American homes, Porch said. The city where these factors are most widespread is Baltimore, with just under 7% of homes having electrical issues. Close behind are four cities where electricity occasionally goes awry in 6.5% of homes: Washington D.C., Phoenix, Pittsburgh, and Seattle.

Porch looked at homes with mold, or those that in the past year have experienced infestations of rats, mice, or cockroaches. Houston, apparently, is full of pesky pests. In this city, 15% of homes have some combination of rodents, roaches, or mold. In the past year, 35% of Houston homes had roaches.

Cities in the Pacific Northwest seem to be the safest. Seattle (2.9%) and Portland (4.6%) had some of the country’s lowest rates of infestations. Detroit slotted just between them in Porch's ranking, with infestations affecting only 3.5% of its homes.