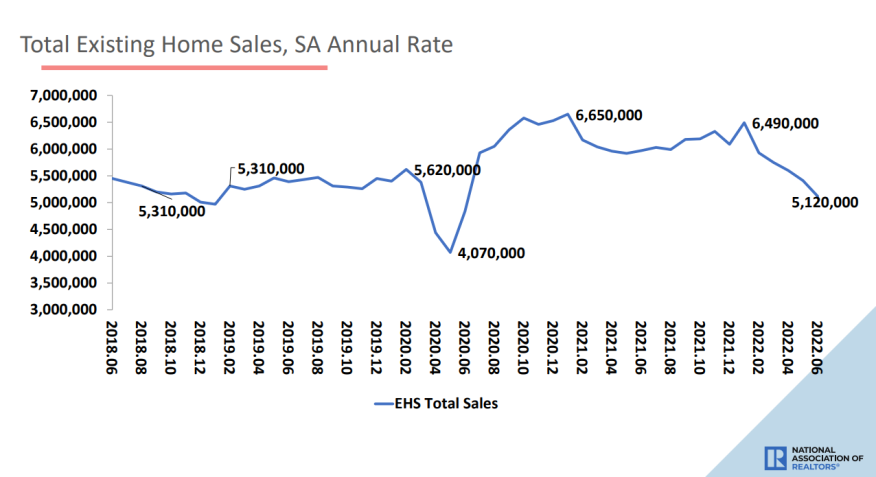 Sales of existing homes fell for the fifth straight month in June, the National Association of Realtors said today.

Total existing-home sales — consisting of completed transactions that include single-family homes, townhomes, condominiums, and co-ops — dropped 5.4% from May to a seasonally adjusted annual rate of 5.12 million in June. Sales also fell 14.2% from 5.97 million in June last year.

"Finally, there are more homes on the market," Yun said. "Interestingly though, the record-low pace of days on market implies a fuzzier picture on home prices. Homes priced right are selling very quickly, but homes priced too high are deterring prospective buyers."

Individual investors or second-home buyers, who make up many cash sales, purchased 16% of homes in June, unchanged from May and a slight increase from 14% in June 2021.

Distressed sales — foreclosures and short sales — represented less than 1% of sales in June, essentially unchanged from both a month and a year earlier.

Existing-home sales in the South slipped 6.2% in June to an annual rate of 2.26 million, down 14.1% from the previous year. The median price in the South was $374,900, a 16.8% bounce from one year ago. For the 10th consecutive month, the South recorded the highest pace of price appreciation in comparison to the other three regions, NAR said.