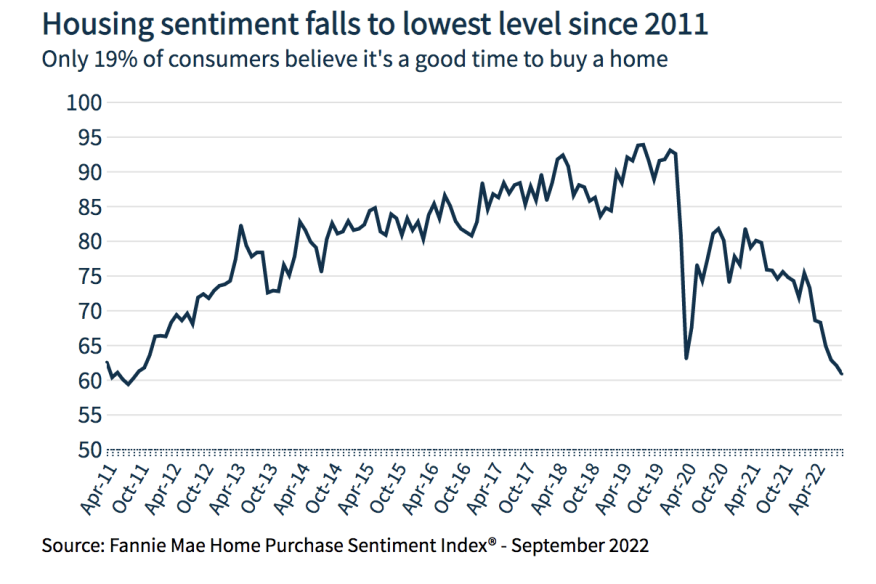 For the seventh consecutive month, a survey by Fannie Mae found consumers are increasing pessimistic about the housing market.

Consumers surveyed for the Home Purchase Sentiment Index (HPSI) reported expectations that mortgage rates will move higher over the next 12 months, and, for the first time since May 2020, more respondents expect home prices to decline. That caused the index to decline 1.2 points last month bringing the year-over-year index down 13.7 points.

“The HPSI declined this month to its lowest level since October 2011,” Doug Duncan, Fannie Mae senior vice president and chief economist, said. “Consumers’ expectation that home prices will decrease matched a survey high, with a higher percentage of consumers believing home prices will decrease rather than increase over the next year – a shift in survey sentiment that had previously only happened in 2011 and at the start of the pandemic in 2020."

The survey found that homebuyers are expressing insecurity in the current market. In September, only 19% of consumers felt that it was a good time to buy a home – down from 22% in August. On the other hand, 59% indicated that it’s a good time to sell. As a result, the share of those who said it is a good time to buy decreased by 5 percentage points month over month.

"Moreover, 75% of consumers still think it’s a bad time to buy a home, with most citing high home prices and unfavorable economic and mortgage rate conditions as primary reasons. As long as supply is limited and affordability pressures continue to constrain potential homebuyers via elevated home prices and mortgage rates, we expect home sales will remain sluggish," Duncan said.

Surveyed consumers also said that they predicted mortgage rates will move higher over the next 12 months. For the first time since May 2020, more respondents than not said they anticipate home prices beginning to cool.

Consumers were also surveyed on their job security concerns and whether they felt comfortable affording a home. Respondents who say they are not concerned about losing their job in the next 12 months decreased just a sliver from 79% to 78%. However, while the percentage who say they are concerned remained unchanged at 21%.

However, not all is bleak. This month, 26% of respondents reported in the survey that their household income is higher than it was a year ago. That's up from 25% last month. The percentage who say that their income decreased went from 15% to 11% this month.