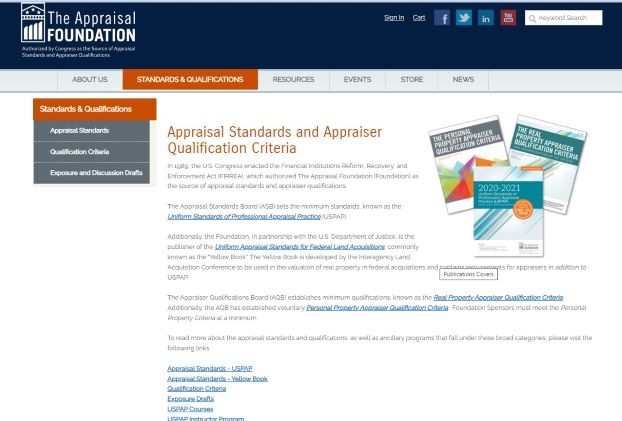 The "standards & qualifications" page on The Appraisal Foundation's website, www.appraisalfoundation.org.

Officials from eight federal agencies have co-signed a letter to The Appraisal Foundation (TAF) demanding the organization include “clear warnings” against racial discrimination in the standards it sets for appraisers.

The letter, dated Feb. 4 and addressed to TAF Chair Michelle Czekalski Bradley, is co-signed by officials from the Consumer Financial Protection Bureau (CFPB); the U.S. Department of Housing and Urban Development (HUD); the Federal Reserve Board (The Fed); the U.S. Department of Justice (DOJ); the Office of the Comptroller of the Currency (OCC); the Federal Deposit Insurance Corp. (FDIC); the National Credit Union Administration (NCUA), and the Federal Housing Finance Agency (FHFA).

The letter was sent following a request for comment on proposed changes to the 2023 Edition of the Uniform Standards of Professional Appraisal Practice (USPAP). TAF is a non-governmental agency and the only organization that sets standards for appraisers in the United States.

The eight federal agencies note in the letter that they each are charged with “enforcing nondiscrimination standards” under the federal Fair Housing Act (FHAct) and the Equal Credit Opportunity Act (ECOA).

The letter notes that the proposed changes to the USPAP include the “Appraisal Standards Board Ethics Rule (Ethics Rule) and Advisory Opinion 16.”

The letter notes that the federal ban on discrimination under the FHAct and ECOA “is not limited only to ‘unsupported’ conclusions. Any discussion of prohibited appraisal bias should call attention to, and maintain consistency with, all applicable nondiscrimination standards provided in federal law, including the FHAct and ECOA. Other federal, state, and local laws may also apply.”

The co-signing federal agencies state they would “welcome the opportunity to discuss these requirements and provide whatever further assistance may be appropriate.”

In a blog on its website, the CFPB states that it is “deeply troubled” by discriminatory statements that the Federal Housing Finance Agency recently identified in some home appraisals, and the “appraisal disparities for communities and borrowers of color” recently revealed in studies conducted by both Freddie Mac and Fannie Mae.

Following the release of the Freddie Mac study, The Appraisal Foundation issued a statement quoting TAF President Dave Bunton as saying the results of the study “are deeply troubling.”

“Having data like this publicly available is critical to continuing to address issues of discrimination and promote diversity, equity, and inclusion in the appraisal profession,” Bunton said. “I hope that we will see even more data released on this issue in the near future so we can better understand the best ways to build and uphold public trust in the appraisal profession.”

He added that TAF “will continue its efforts to create an appraisal profession that is reflective of the United States we live in today and trusted by all Americans. We look forward to working with professional appraisal organizations, federal and state agencies and other stakeholders to address this sobering report.”

The blog states that CFPB nonetheless remains “concerned that some appraisers may be unaware” of the federal discrimination bans and it urges TAF to provide clear guidance on “the existing legal standards as they relate to appraisal bias.”

The CFPB blog also states that the bureau is “carefully reviewing” the findings of the “Identifying Bias and Barriers, Promoting Equity: An Analysis of the USPAP Standards and Appraiser Qualifications Criteria” report funded by the Appraisal Subcommittee of the Federal Financial Institutions Examination Council. That scathing report, the CFPB blog states, raises serious concerns about existing appraisal standards and offers recommendations regarding fairness, equity, objectivity, and diversity in appraisals, and in the training & credentialing of appraisers, the CFPB said.

The blog adds that the Interagency Task Force on Property Appraisal and Valuation Equity (PAVE) has been formed to “create an equitable path toward addressing the persistent misvaluation and undervaluation of properties experienced by families and communities of color.” The CFPB blog states that the bureau looks forward to “engaging with all relevant stakeholders and using all of the CFPB’s tools, in collaboration with our inter-agency partners, to address these important issues.”