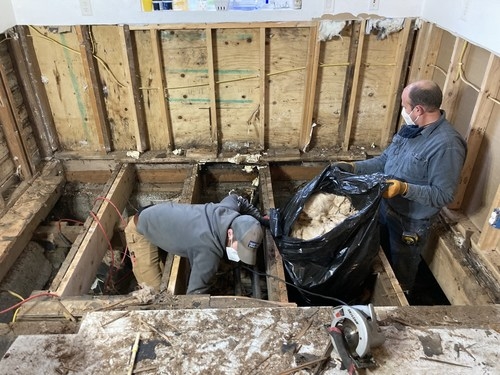 Ben Graf and his father removing mold and rat residue from the subfloor. Photo by Ben Graf.

After months of home searching in the blazing Seattle metropolitan area, first-time homebuyers Ben and Dani Graf decided to go $65,000 over budget on a house that was in serious need of renovations.

The Graf family has suffered from intense competition like many first-time homebuyers have throughout the pandemic. Despite once having a healthy budget, flexible time, and a free place to stay, the Grafs were pressured by unprecedented housing conditions to make drastic compromises.

The Grafs wanted to purchase a home in the Seattle metro area, where homes are taken off the market after about 5 days with a median $742,000 sale price. That is almost a third of the national median, where a house typically stays on the market for 14.7 days.

After making several offers on multiple homes way beyond their budget, the Grafs spent $565,000 on a house that clearly needed repairs. On Zillow, they found a 1,000-square-foot house on half an acre of land just five minutes away from where Ben’s parents live.

The renovations ended up costing much more than expected. Four months after closing and the family has yet to spend a night in their new home. However, the Grafs reported feeling lucky for being able to buy a house at all. Nearby, a comparable home just sold for $630,000, making their purchase look like a bargain.

“The light being able to live in the house — you know with stuff on the floor, appliances hooked up, a place to store and cook food,” Ben said. “We’re getting close to that livable point, and then we still have a ways to go until it’s really ours.”

More from
Analysis and Data
Pending Home Sales Down Again

Analysis and Data
May 26, 2022
Homebuyer Affordability Drops With Jump In Monthly Payments