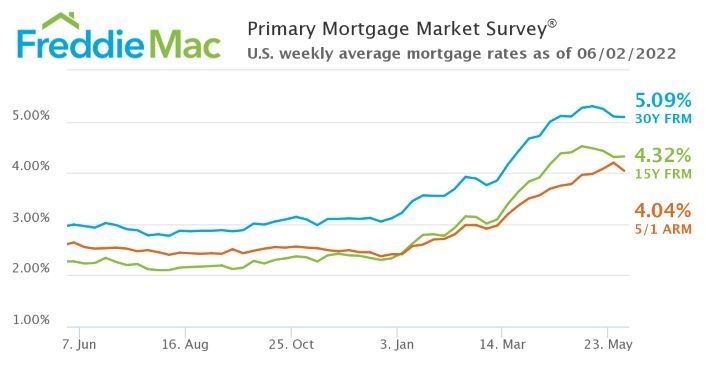 Mortgage rates continued to decline this week, but remain much higher than last year, according to the latest weekly survey released today by Freddie Mac.

According to Freddie Mac’s Primary Mortgage Market Survey (PMMS), the 30-year fixed-rate mortgage (FRM) averaged 5.09% as of today, down from 5.1% last week.

“Mortgage rates continued to inch downward this week, but are still significantly higher than last year, affecting affordability and purchase demand,” Sam Khater, Freddie Mac’s chief economist, said. “Heading into the summer, the potential homebuyer pool has shrunk, supply is on the rise and the housing market is normalizing. This is welcome news following unprecedented market tightness over the last couple years.”

According to the PMMS:

Freddie Mac said the PMMS is focused on conventional, conforming, fully amortizing home purchase loans for borrowers who put 20% down and have excellent credit. Average commitment rates should be reported along with average fees and points to reflect the total upfront cost of obtaining the mortgage, it said.

“Expectations for how the Federal Reserve will attempt to tame inflation while avoiding a recession are being priced into mortgage rates today,” Thomas said. “Despite low unemployment and ongoing inflationary pressures, markets are beginning to show concern over slowing economic growth, as central banks tighten monetary policy.”

The result, he said, “is softening rates. Although the Fed has maintained their stance on 50 basis point rate increases at the next few meetings — which would put upward pressure on mortgage rates — investors seem to be betting that the economy could sputter, and the Federal Reserve will have to slow down rate hikes sooner than previously anticipated.”

He added that the markets will continue to analyze “lots of employment related data this week to ascertain the potential direction of the economy based on labor markets and what impact that may have on rates going forward.”