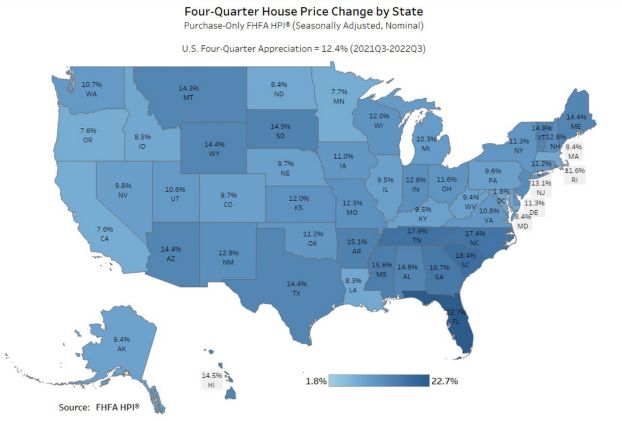 Any way you look at it, home price growth continued to hit the brakes in the third quarter of 2022.

Both the Federal Housing Finance Agency’s House Price Index and the S&P CoreLogic Case-Shiller U.S. National Home Price NSA Index were released on Tuesday. Each showed varying levels of slower growth, both month to month and annually, in September and for the third quarter.

Before seasonal adjustment, the U.S. National Index decreased 1% month over month in September, while the 10-City and 20-City Composites posted decreases of 1.4% and 1.5%, respectively.

After seasonal adjustment, the U.S. National Index posted a month-over-month decrease of 0.8%, and the 10-City and 20-City Composites both posted decreases of 1.2%.

“House prices were flat for the third quarter but continued to remain above levels from a year ago,” said William Doerner, Ph.D., supervisory economist in FHFA’s Division of Research and Statistics. “The rate of U.S. house price growth has substantially decelerated. This deceleration is widespread, with about one-third of all states and metropolitan statistical areas registering annual growth below 10%.”

Some Key Highlights Of The FHFA HPI:

According to the Case-Schiller Index report, all 20 cities reported declines before and after seasonal adjustments in September.

“As has been the case for the past several months, our September 2022 report reflects short-term declines and medium-term deceleration in housing prices across the U.S.,” said Craig J. Lazzara, managing director at S&P DJI. “For all three composites, year-over-year gains, while still well above their historical medians, peaked roughly six months ago and have decelerated since then.”

He added that, despite considerable regional differences, “all 20 cities in our September report reflect these trends of short-term decline and medium-term deceleration. Prices declined in every city in September, with a median change of -1.2%. Year-over-year price gains in all 20 cities were lower in September than they had been in August.”

Lazzara cited the Federal Reserve’s efforts to fight inflation, including it’s recent string of three consecutive 75-basis-point increases in the benchmark federal funds rate, as having an impact on home prices.

“As the Federal Reserve continues to move interest rates higher, mortgage financing continues to be more expensive and housing becomes less affordable,” he said. “Given the continuing prospects for a challenging macroeconomic environment, home prices may well continue to weaken.”