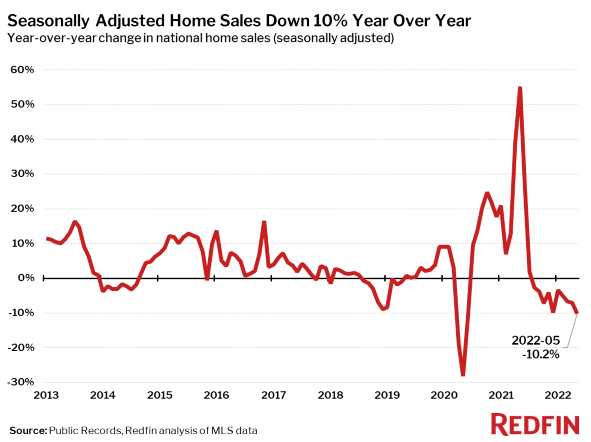 Rising mortgage rates cause home sales to fall in May for only the second time on record, while home prices saw the smallest May increase on record.

Redfin, the technology-powered real estate brokerage, has been tracking home sales and prices since 2012. In all that time, it has recorded a decline in sales in May from a month earlier just once.

Until last month, that is.

According to the latest report from Redfin, seasonally adjusted home sales in May totaled 556,200, down 3% from April, the only month-over-month decline in May on its record outside of May 2020, when the start of the pandemic sent shockwaves through the housing market. Home sales also fell 10.2% from a year earlier.

May’s results followed the hottest March on record, which ended with early signs of a cooldown as more buyers were edged out by soaring mortgage rates, sky-high prices, and few new listings.

Despite the decline in demand last month, the inventory of homes for sale still fell 0.7% from April and were down 4.3% from a year earlier, Redfin said. As the market remains tight and new listings also decline, May saw the smallest drop in active listings since November 2019, it said.

Home prices in May rose 1.5% from a month earlier, but that was the smallest month-over-month increase for any May in Redfin’s records, the company said. Prices were still up 14.8% from a year earlier.

The housing market has cooled considerably as mortgage rates climbed to their highest levels since 2009, Redfin said.

“The sudden and dramatic surge in mortgage rates has been a shock to the system for housing,” said Daryl Fairweather, Redfin’s chief economist. “With inflation still at 40-year highs, mortgage rates are likely to stay elevated for a while, so the market will have to adjust to this new reality.”

“Homebuyers, however, are facing mortgage rates near 6%,” she added, “which means the housing-market slowdown will likely continue into the fall. But one silver lining is that homebuyers are facing less competition for the first time in two years.”

Here are the numbers at a glance: 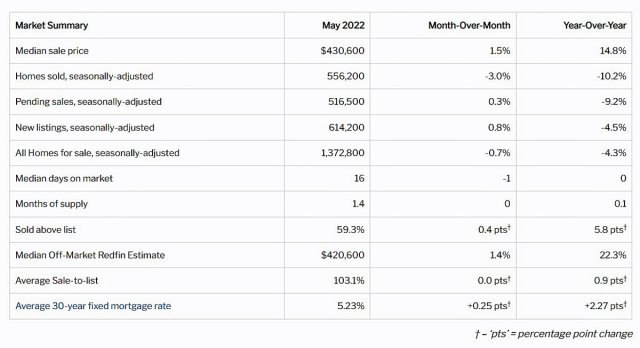 Here are some key metro-level highlights from the report: