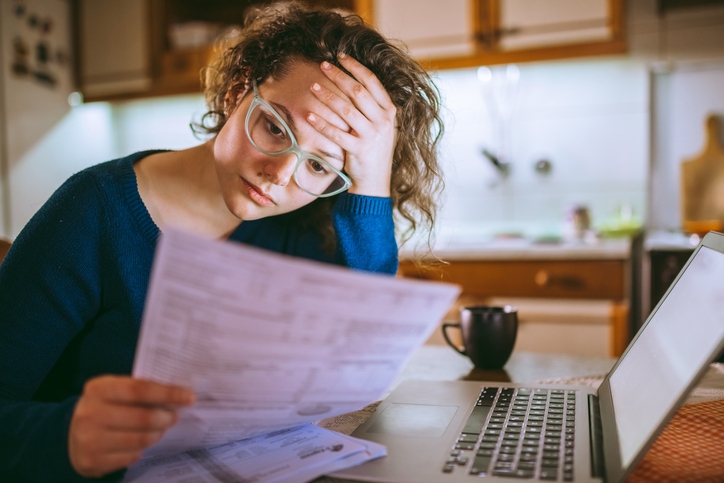 Mortgage debt is rising despite the fact that mortgage originations for refinances and purchases are trending downward.

The Federal Reserve Bank of New York's quarterly household debt report shows an increase in household debt of $266 billion (1.7%) to $15.84 trillion for the first quarter of 2022. But new loan originations – both for home purchases and refinancing of existing mortgages – fell to $859 billion, the lowest since the second quarter of 2020.

Mortgage and auto loan balances rose by $250 billion and $11 billion, respectively, in the first quarter, although originations for both subsided from historically high levels in 2021. Additionally, credit card balances declined by $15 billion, in line with seasonal trends typically seen at the start of the year, but are still $71 billion higher than in 2021. The first quarter represented a substantial year-over-year increase.

"The first quarter of 2022 saw an increase in mortgage and auto loan balances coupled with a typical seasonal decrease in credit card balances," Andrew Haughwout, director of Household and Public Policy Research Division at the New York Fed, said. "However, mortgage originations declined from the historically high volumes seen in 2021, reflecting an unwinding in the demand for refinances."

Although mortgage originations were at $859 billion this quarter – representing a decline from the high volumes seen during 2021 – originations are still $197 billion higher than in the first quarter of 2020, right before the pandemic hit the United States.

The blog post, authored by Haughwout, Donghoon Lee, Daniel Mangrum, Joelle Scally, and Wilbert van der Klaauw, asserts there has been a high volume of new mortgage originations, defined as mortgages that newly appear on credit reports and includes both purchase and refinance mortgages. There has been $8.4 trillion in new mortgage debt originated in the last two years, as a steady upward climb in purchase mortgages was accompanied by an historically large boom in mortgage refinances.

The Fed’s analysis shows that mortgage refinances surged in the last two years, as many homeowners were able to take advantage of historically low interest rates. Purchase originations also increased at a steady pace. Yet, the beginning of 2022 shows a modest decline in purchase originations and a relatively sharp drop in refinances. 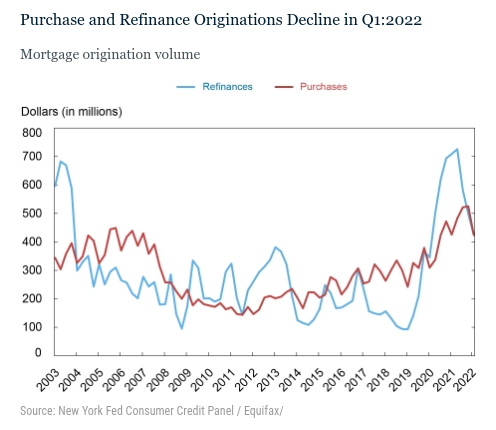 This sharp and sudden decline is likely the result of steadily increasing interest rates. According to the Mortgage Bankers Association (MBA), the average contract rate on a 30-year fixed-rate mortgage increased by more than 1.5 percentage points in the first three months of the year. The rate has climbed further throughout the first quarter, reaching 5.36% at the end of April, around the highest since 2009. Meanwhile, MBA's weekly refinancing index stands near the lowest since 2018.

The Fed’s report also shows balances on home equity lines of credit (HELOC) were relatively flat and have been for the past three quarters, disrupting a declining trend that’s been continuing since the fourth quarter of 2016. The outstanding HELOC balance stands at $317 billion.

One component of home purchases not included in The Fed’s analysis are those made with all cash – which, according to a recent report from the National Association of Realtors, are increasing in prevalence and comprised 28% of purchases of existing homes in March.

Additionally, the report shows that the share of current debt transitioning into delinquency increased modestly for nearly all debt types but remains historically low. The delinquency transition rate for credit cards increased by 0.2 percentage point, while mortgages, auto loans, and home equity lines of credit all saw 0.1 percentage point increases. Although the number of new foreclosures remains very low, there was a small uptick in new foreclosures in the first quarter of 2022.