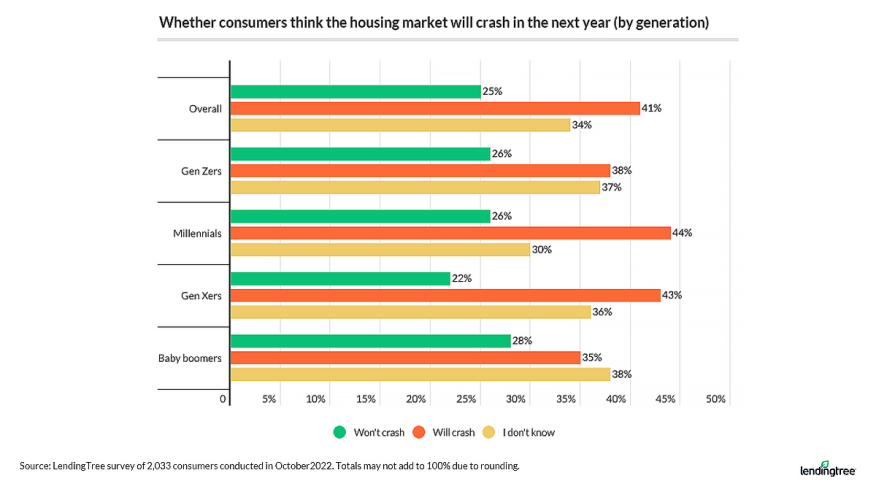 A significant portion of U.S. consumers expect the housing market to crash next year, according to a new survey commissioned by LendingTree.

Survey results show 2 in 5 Americans (41%) believe the housing market will crash in the next 12 months. Of those who believe a crash is coming, 74% think it’ll be as bad or worse as the 2008 housing market collapse.

Among those expecting a crash, 33% said they believe inflation will be the biggest driver, followed by 24% who cited high-interest rates and 16% who cited a lack of affordable housing.

Millennials, at 44%, were the most likely generation to agree a crash is coming, while baby boomers (35%) were the least likely.

Another 16% said the housing market won’t crash because the supply and demand aren’t there, while 15% said the measures being taken to prevent inflation from getting worse will prevent a housing crash. Another 13% said affordable housing is abundant.

LendingTree commissioned Qualtrics to conduct the online survey of 2,033 U.S. consumers ages 18 to 76 on Oct. 18, 2022. The survey was administered using a nonprobability-based sample, and quotas were used to ensure the sample base represented the overall population, LendingTree said. It added that all responses were reviewed by researchers for quality control.