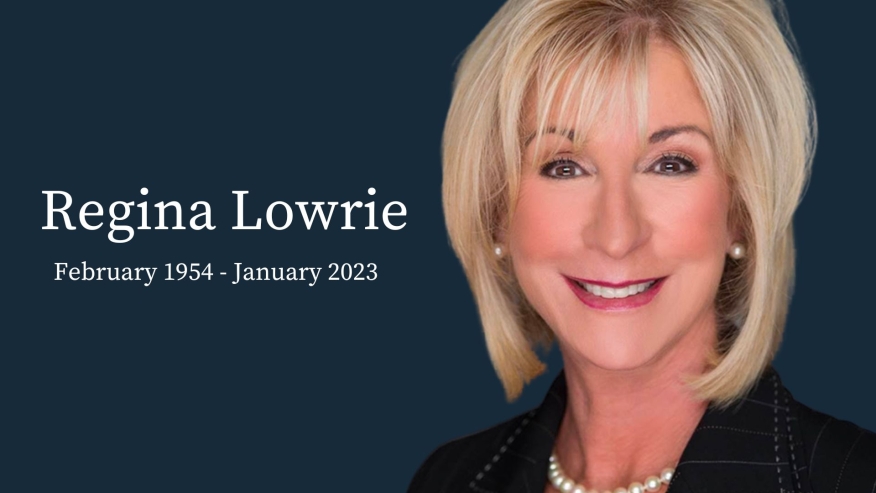 Dytrix CEO with 40 years in the mortgage industry was first woman to chair MBA board.

Regina M. Lowrie, the first woman to chair the Mortgage Bankers Association's board of directors, died suddenly over the weekend.

In a letter sent Monday to its members, the Mortgage Bankers Association of New Jersey announced that Lowrie “passed away on Sunday, January 1. … Regina had invited guests to her new home in Brigantine, N.J., and was found deceased when they arrived.”

The letter, signed by MBA of New Jersey Executive Director and Counsel E. Robert Levy, said Lowrie “was not only a dear friend for many years but was an integral part of our industry, both on a national and state level.”

Lowrie had more than 40 years of experience in the mortgage industry, including as president and CEO of Dytrix, a provider of financial transaction security technology that she founded in 2019. Last year, Dytrix was named "Company of the Year" by CIOReview magazine.

She also was the founder, president and CEO of RML Investments Inc. in Blue Bell, Pa., which did business as RML Advisors. Founded in 1994, RML served the financial services industry as an adviser and consultant.

Lowrie earned numerous accolades during her career, including being named one of Mortgage Banking’s Most Powerful Women in 2019 by National Mortgage Professional magazine.

Other honors for Lowrie include being chosen for the Philadelphia Business Journal and National Association of Women Business Owners' 2006 Women of Distinction Award; being recognized by the Credit Counseling Community Services of Delaware Valley as an outstanding member of the Philadelphia community, receiving the "A Credit to Greater Philadelphia Community Award” in 2006; being a Mortgage Banking Leading Industry Women honoree in 2013; and receiving the American Association for Women in Community Colleges Trustee of the Year Award and the Montgomery County Community College Leading Woman Award in 2014.

From 2007 to 2013, she served as president of Vision Mortgage Capital, a division of Continental Bank, and as senior vice president of Continental Bank. She was responsible for managing all aspects of the mortgage division, including strategic planning, enterprise risk management, quality control, compliance, secondary marketing, and sales operations and budgeting.

From 1994 to 2006, Lowrie was president and CEO of Gateway Funding Diversified Mortgage Services in Horsham, Pa. When the company was sold in 2006, it had 800 employees, 57 branch offices, and $3.5 billion in loans with revenue over $100 million, according to biographical information posted by Cherry Hill Mortgage Investment Corp., for which she served as a director.

Lowrie attended the University of North Carolina's Kenan-Flager Business School, and was a Certified Mortgage Banker.

She was elected chairwoman of the MBA board in 2005, the first woman to fill that post. It was the second time she earned such a distinction; she also had been the first woman elected to chair the MBA of Greater Philadelphia in 1995.

“MBA‘s staff and members are saddened by Regina’s passing,” Broeksmit said. “She was a trailblazing leader who was the first woman to serve as MBA’s chairman. Her tenacity, resilience, and fierce advocacy for our industry will long be remembered by all those fortunate enough to have interacted with her. We offer our condolences to her friends, colleagues, and family.”

Levy, the executive director and counsel for the MBA of N.J., said Lowrie was a long-standing member of the Regional Conference of MBAs Planning Committee.

“Regina has been a tremendous help in planning the conference, as well as having created and moderated our industry leaders panel, which has been a highly regarded part of the conference’s programs over the years,” Levy wrote in his letter to members.

“Regina was a dedicated and loyal individual who was always straightforward in her views and always ready to be there for her friends and colleagues at any time if she could be helpful,” he added. “To say that she will be greatly missed is an understatement. It will take all of us some time to digest the news of this shocking loss.”