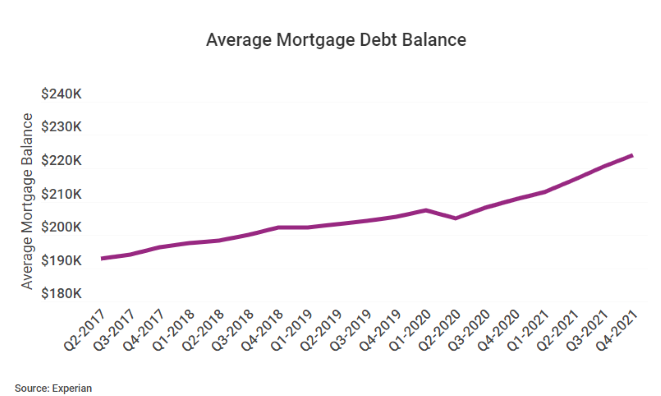 As housing prices rose during the pandemic, U.S. homeowners saw their mortgage debt increase along with them, credit agency Experian reports.

Experian looked at how mortgage debt varies by state and how it's grown over time, specifically from 2017 to 2021. The analysis included mortgage holders who owned just one property, as well as those who had invested in one or more properties they do not live in. The data is representative of total mortgage debt per person, and includes only residential property owners, it said.

Homeowners in Colorado, Tennessee, Texas and Washington were right behind those two states, increasing their mortgage debt by as much as 20%, Experian said.

Combined, American consumers hold $11.39 trillion in mortgage debt, up $207 billion in the second quarter of 2022, according to a report from the New York Federal Reserve Bank.

Experian said homeowners in California and Washington had the highest average mortgage debt, while West Virginia and Mississippi had the lowest. Hawaii's average of more than $371,000 made it the second-highest state for mortgage debt, it said.

Home prices began increasing dramatically in the summer of 2020, after many states eased COVID-19 lockdown restrictions. Housing markets heated especially in states with less dense populations that saw a surge of remote workers who were no longer required to live close to their offices, Experian said.

Home-price growth tapered a bit at the start of 2022, and following four interest rate hikes this year by the Federal Reserve, the market is experiencing a slowdown. Home prices are expected to keep growing, but much more slowly.