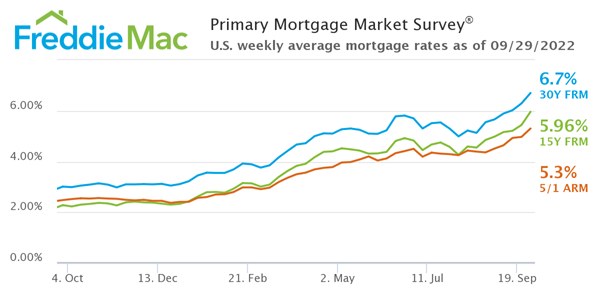 According to Freddie Mac's Primary Mortgage Market Survey, rates for the 30-year fixed, 15-year fixed and 5-year adjustable mortgages all increased by at least 33 basis points this week from a week earlier. Rates have now more than doubled where they were at this point last year.

“The uncertainty and volatility in financial markets is heavily impacting mortgage rates,” said Sam Khater, Freddie Mac’s chief economist. “Our survey indicates that the range of weekly rate quotes for the 30-year fixed-rate mortgage has more than doubled over the last year. This means that for the typical mortgage amount, a borrower who locked-in at the higher end of the range would pay several hundred dollars more than a borrower who locked-in at the lower end of the range.”

He added, “The large dispersion in rates means it has become even more important for homebuyers to shop around with different lenders.”

Rates continue to rise rapidly and plague the market after hitting a 14-year high last week.

“The Federal Reserve’s aggressive efforts to curb inflation are having a profound impact on the mortgage market," said Bob Broeksmit, CMB, president and CEO of the Mortgage Bankers Association (MBA). "Mortgage rates have increased more than a percentage point in the past six weeks, and refinance and purchase applications continue to decrease on both a weekly and annual basis. Despite the pullback in activity in recent weeks, MBA is still expecting purchase volume to close the year at $1.6 trillion, versus last year’s record of $1.9 trillion.”