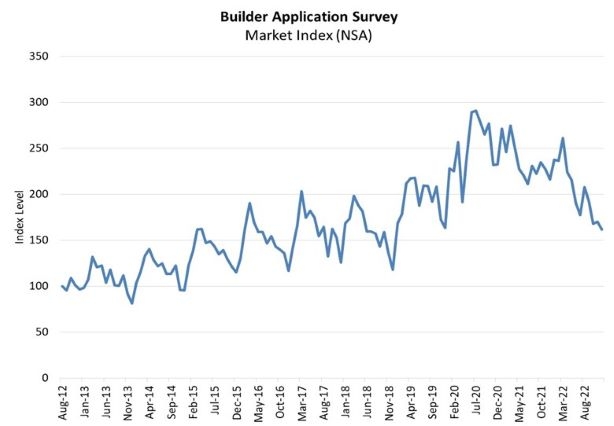 The MBA’s Builder Application Survey (BAS) data for December 2022 also showed that applications fell 5% from November. The change does not include any adjustment for typical seasonal patterns.

“December new home purchase activity — both for applications and estimated sales — ran more than 20% behind last year's pace,” said Joel Kan, MBA’s vice president and deputy chief economist. “The decline in activity was in line with single-family housing starts that were 32% lower than a year ago. Higher mortgage rates and a weakening economy held back buyers at the end of last year.”

“This week’s builder sentiment index from the NAHB reflected an improving outlook, with mortgage rates down from recent highs and increased buyer traffic, as mortgage rates have backed off from recent highs,” Kan continued. “The housing market is still in need of more starter and entry-level homes, especially when current demographic trends point to the potential for more younger households to enter homeownership in the near future. New construction of these units will help these buyers entering the housing market.”

According to the National Association of Home Builders (NAHB)/Wells Fargo Housing Market Index (HMI), released Wednesday, builder confidence in the market for newly-built single-family homes in January rose four points to 35, the first increase since December 2021.

MBA estimates that new single-family home sales — which have consistently been a leading indicator of the U.S. Census Bureau’s New Residential Sales report — ran at a seasonally adjusted annual rate of 641,000 units in December, based on data from the BAS. The new home sales estimate is derived by using mortgage application information from the BAS, as well as assumptions regarding market coverage and other factors, the MBA said.

MBA’s Builder Application Survey tracks application volume from mortgage subsidiaries of home builders across the country. Using this data, as well as data from other sources, MBA provides an early estimate of new home sales volumes at the national, state, and metro levels. The data also provides information about the types of loans used by new home buyers.

Official new home sales estimates are conducted monthly by the Census Bureau. In that data, new home sales are recorded at contract signing, which typically coincides with the mortgage application.