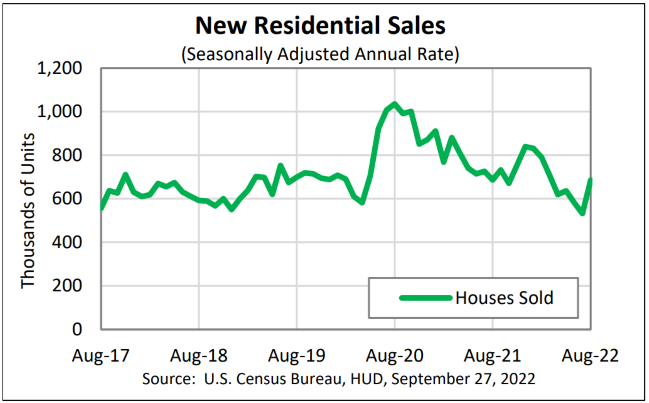 New-home sales spiked nearly 29% in August, boosted by a brief dip in mortgage rates, but the increase may also be inflated by a lag in tracking sales contract cancellations.

Sales of new single‐family houses in August were at a seasonally adjusted annual rate of 685,000, according to estimates released jointly today by the U.S. Census Bureau and the U.S. Department of Housing and Urban Development.

The seasonally adjusted estimate of new houses for sale at the end of August was 461,000, representing a supply of 8.1 months at the current sales rate.

“The sales gain in August reflects that there is clearly sidelined demand for housing, but it is being constrained by rising interest rates that are pricing many potential consumers out of the market, particularly entry-level buyers,” said Robert Dietz, chief economist for the National Association of Home Builders. “After a brief lull when mortgage rates fell below 5.3% for much of August, they have since jumped much higher in September and are now approaching 7%.”

Dietz added that the Federal Reserve “should take careful note of the weakening of the housing market given the policy lag involved with monetary policy. Housing is a leading indicator of economic conditions.”

Odeta Kushi, deputy chief economist for First American Financial Corp., said that while today’s report was a surprise, the housing market is not “out of the woods.”

“Rising cancellations may have resulted in inflated sales numbers in August, while the decline in the average 30-year, fixed mortgage rate between July and August may have prompted upward pressure on sales,” Kushi said.

She said that, as Bill McBride of Calculated Risk has noted, the Census Bureau does not make adjustments to its new-home sales figures to account for cancellations of sales contracts.

“With rising cancellations, they will overestimate sales and underestimate inventory,” she said. “Leading indicators, such as permits and builder confidence, indicate ongoing weakness. With mortgage rates now above 6% and ongoing supply-side headwinds for builders, it's likely the housing market will continue cooling as we head into the fall months.”

Kushi also noted that affordability is increasingly difficult for buyers.