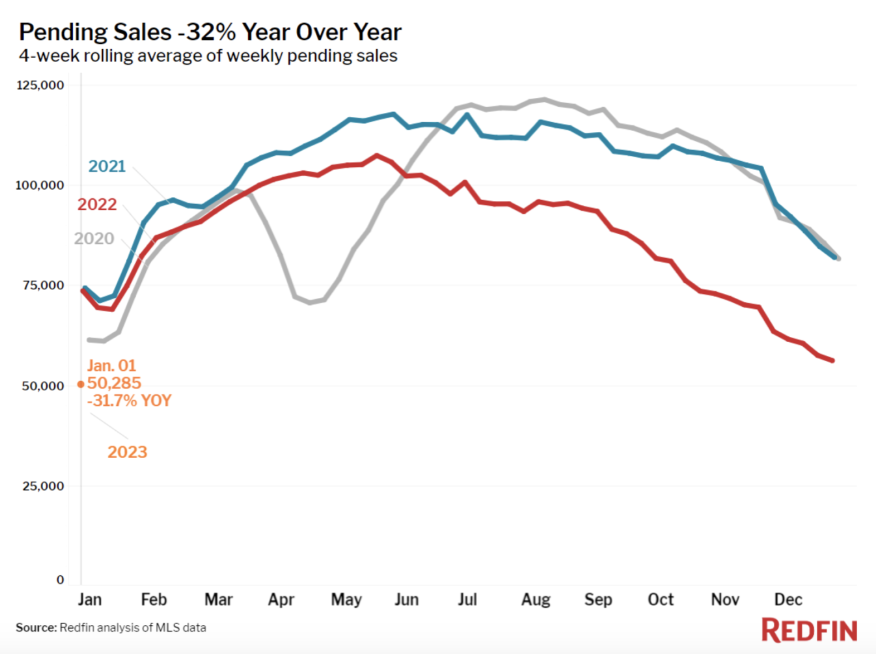 Pending U.S. home sales dropped 32% year over year to their lowest level since at least 2015 during the four weeks ended Jan. 1, according to a new report from Redfin.

The drop in pending sales may be attributed to the housing market fizzling out just before the new year. A looming recession, 6%-plus mortgage rates, record-low new listings, extreme winter weather, and the typical holiday slowdown are all key factors in the cooling market.

Redfin said buyer demand is hard to gauge for the start of 2023. The online brokerage said its seasonally adjusted Homebuyer Demand Index — a measure of tour requests and other buying services from Redfin agents — was up 8% from two weeks earlier. The index was up 10% from a month earlier during the four weeks ended Jan. 1 but down 20% from a year earlier.

“Two categories of buyers are starting their search right now: First-timers hoping prices and competition are more manageable than they have been over the last few years, and returning buyers who took a break after losing out on multiple homes during the pandemic bidding-war frenzy,” said Shoshana Godwin, a Redfin agent in Seattle. “They should be able to take their time and find a home for a slightly lower price than last year, but the market will likely become more competitive over the next few months. I expect new listings to remain scarce as homeowners hold onto low interest rates while the pool of determined buyers circle the few homes that are available.”

The report also saw a dip in home prices, with the typical U.S. home selling for $350,000 during the four weeks ended Jan. 1. That’s up just 0.5% from a year earlier, slightly slower than the 0.7% growth at the beginning of the pandemic, when the market nearly ground to a halt.

On a metro level, Redfin said home-sale prices fell year over year in 19 of the 50 most populous U.S. metros during the four weeks ended Jan. 1. By comparison, just 10 metros saw price declines in December.

Redfin’s metro analysis saw California as a trending area with home price declines. Prices fell 10.4% year over year in San Francisco, 6% in Sacramento, 5.6% in San Jose and 5.4% in Los Angeles. Redfin says the numbers mark the biggest year-over-year drop for San Francisco prices since at least 2015.

The report also included indicators of homebuying activity. For the week ended Jan. 5, 30-year mortgage rates ticked up to 6.48%. Mortgage purchase applications during the week ended Dec. 30 were down roughly 12% from two weeks earlier, and were down 42% from a year earlier.

Touring activity as of Dec. 29 was down 63% from the start of the year, compared to a 54% decrease at the same time last year, according to home tour technology company ShowingTime. The significant declines were likely due to the holidays.