Rate Locks Down 5.4% In February 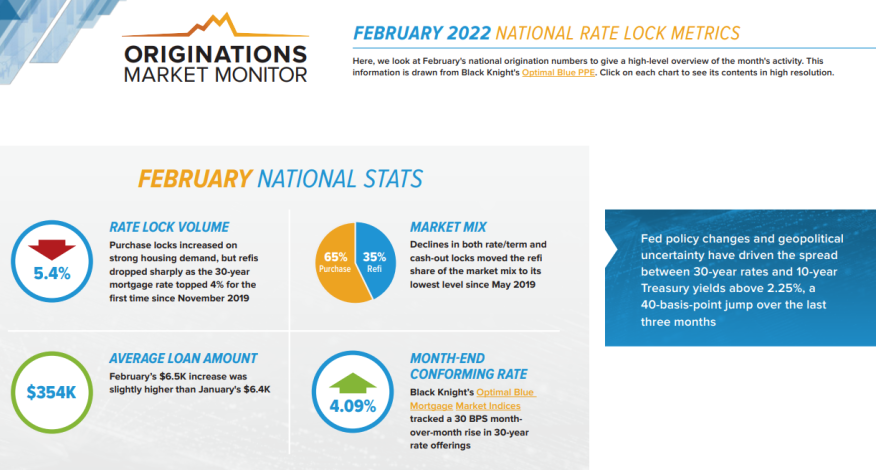 Refinance lending activity was down for the fifth consecutive month – falling to the lowest level in three years – and is now more than 80% off 2021 levels.

Driven by declines in both cash-outs and refis, mortgage rate locks fell 5.4% in February, according to Optimal Blue, a division of Black Knight.

Cash-outs and refis saw month-over-month drops of 15.3% and 34.1%, respectively. Declines in both rate/term and cash-out locks moved the refi share of the market mix to its lowest level since May 2019.

“As we noted back in November, the Federal Reserve’s unwinding of its bond buying program has been having a stronger impact on mortgage rates than Treasury yields,” said Scott Happ, president of Optimal Blue. “Driven by Fed policy and exacerbated by global instability, we’ve seen the spread between 30-year conforming rates and 10-year Treasury yields climb more than 40 basis points in just three months, topping 2.25% in February.”

With the rate of home price growth continuing its reacceleration, nonconforming products captured further market share in February and now account for 17% of lock activity, according to the monthly report.

At the same time, upward pressure on home prices pushed the average home loan amount up another $6,400 to $354,000, the report said.

Pull-through rates — the share of locks that result in funded loans — fell on both purchase and refinance locks, with refi pull-through falling to just 68.6%, according to the report.

“While refinance activity took a hit in February due to sharp rises in conforming rates, purchase lending rose again on strong homebuyer demand,” Happ said. “The 7.2% month-over-month increase in purchase locks pushed February purchase volumes up 5.6% from the same time last year. The average home loan amount continues to climb in the face of rising home prices and tightening affordability."