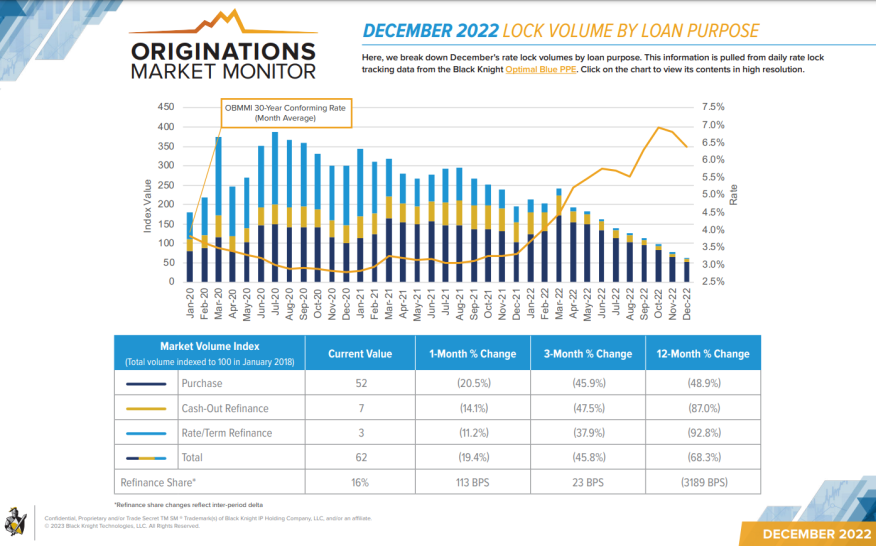 According to Black Knight, overall rate lock volumes declined by 19.4% in December from a month earlier as elevated mortgage rates kept buyers, sellers, and refinance candidates on the sidelines. The volume was the lowest in the five years since Black Knight has tracked the metric, the company said.

Overall lock volumes are down 45.8% over the last three months and 68.3% off last year’s levels, the company said.

The overall decline was driven by a 20.5% drop in purchase locks in December from a month earlier. Purchase locks are down nearly 46% over the past three months and nearly 49% year over year.

While the refi share increased slightly from November, they made up just 16% of December’s lock activity, the company said.

“Mortgage rates declined through the first half of December, but reversed course as the (Federal Reserve) doubled down on their stance of additional tightening in 2023,” said Kevin McMahon, president of Optimal Blue, a division of Black Knight. “The spread between mortgage rates and the 10-year Treasury yield narrowed another 22 BPS during the month to 264 BPS, 40 BPS off the recent high, but is still up 81 BPS for the year.”

Black Knight said its Optimal Blue Mortgage Market Indices (OBMMI) tracked 30-year rates, which fell to as low as 6.25% for the month before rebounding to finish December at 6.52%, down 6 bps from November.

Other key findings of the Black Knight report include:

Black Knight’s Originations Market Monitor provides origination metrics for the U.S. and the top 20 metropolitan statistical areas by share of total origination volume. A look at the 20 metro areas is available here.

In addition, both the month-over-month rate/term refi lock figure and the purchase index rate lock figure decreased for the third consecutive month. Cash-out refis were down 23.5% in December from a month earlier, and were down 90% from a year earlier, the report said.

Rate/term refi volume also fell dramatically, down 17% in December from a month earlier and down 93.3% from a year earlier.

MCT noted that its rate lock activity indices are based on actual dollar volume of locked loans, not the number of applications. “Especially in a tight purchase market, MCT believes its methodology (using actual loans locked vs. applications) is a more reliable metric,” the company said.