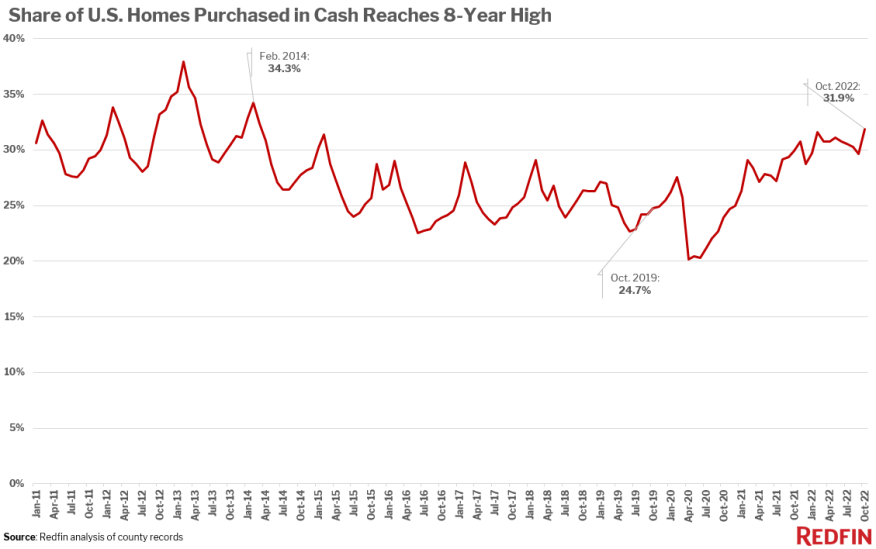 Roughly one-third of U.S. home purchases were made with all cash in October.

Nearly one-third (31.9%) of U.S. home purchases were paid for with all cash in October, according to a new report from Redfin. That’s up from 29.9% a year earlier and the highest share since 2014.

The share of home purchases using all cash shot up at the beginning of 2021 after reaching a record low of 20.1% in April 2020. But Redfin noted that the factors encouraging buyers to pay in cash are different in the current slow housing market than they were during the pandemic homebuying frenzy.

“Today’s affluent homebuyers are motivated to pay in cash because the surge in mortgage rates makes them want to avoid loans — and the high monthly interest payments that come with them — altogether. Mortgage rates have declined in recent weeks, but are still hovering above 6%,” said Redfin Economics Research Lead Chen Zhao. “During the pandemic housing boom, buyers were incentivized to pay in cash because of low rates, which drove up competition and made all-cash offers an effective bargaining chip for those who could afford them.”

All-cash purchases were most common in Florida in October. Roughly half of the homes in Jacksonville (49.7%) were bought in cash in October.

The lowest share of all-cash purchases was in the West coast market, especially in the Bay Area of California. Just 14.3% of home purchases in San Jose and 16.5% in Oakland were paid in cash.

Redfin’s report also found that FHA loans bounced back. Roughly one in seven (14.6%) mortgaged home sales used an FHA loan, the highest share in nearly two years. That’s up from 13.1% a year earlier and a record low of 10.4% in April.

Overall, Redfin says conventional loans are the most common for homebuyers, making up over three-quarters (78.5%) of all home sales that used a mortgage in October. That’s down from 80.5% a year earlier, but largely in line with where the share has stood since mid-2020.

The full Redfin report can be read here.